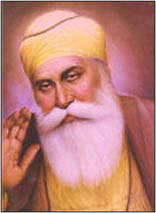 Guru Nanak was born in 1469 in a village located near the contemporary Pakistani city of Lahore. Raised in a Hindu family, Nanak was also exposed to Muslim literature and learned to speak both Persian and Arabic. According to Sikh tradition, at the age of 30 Guru Nanak disappeared and was presumed to have drowned. He reappeared after three days, having experienced a divine revelation, which he proceeded to propagate through extensive travels through the Indian subcontinent and beyond. Immediately following his three-day disappearance, Guru Nanak was said to have remarked, "There is no Hindu, nor any Muslim." This statement, which rejects religious identity as a form of classification, has been interpreted by Sikhs to proclaim a message of universal brotherhood. It is this spirit that animates The Guru Nanak Interfaith Prize, an award that recognizes the oneness of humanity, even in the face of religious divisions.