Ask the members of Hofstra University’s Speech and Debate team what they’ve learned most from their experience on the team, and many will say it is the value and power of their own voice.

“We compete against teams from across the country, and being able to articulate how I feel about the issues I see around me is an important skill,” said Tyler Johnson, a junior TV production studies major from Glenwood, Maryland and the team’s speech captain. “Our voices really do matter.”

Richkisha Walcott, a freshman chemistry major from Queens, New York, likes to recite poetry, finding it helps her overcome her fear of public speaking while providing a platform to address issues that she’s passionate about.  “The collection of poems I choose are often about the state of black women in this country,” she said. “It’s a social issue that we need to talk about, and through my performances, I try to tell those stories. I found that doing speech has given me a way to express myself and not be scared.”

The Speech & Debate team, also known as Hofstra Forensics, is a program in the Department of Rhetoric that trains students to compete in debate and public speaking events against peers from dozens of other colleges and universities across the nation.   They participate in several debate formats, as well as 11 individual speech events such as impromptu or persuasive speaking and drama or prose interpretation.

“Our program is not just about being the best or having the most experience. It’s about building people and developing critical thinking skills and presentation skills and also networking with people, which are all important in any career path,” said Tomeka Robinson, PhD, associate professor of rhetoric and the team’s director.

Dr. Robinson came to Hofstra in 2014 to re-launch the team, which had been inactive since 2008. The new program was immediately popular with students from all majors and backgrounds, drawing an average of 26 members as part of its first travel team.

Success soon followed. In their first two tournaments, members won nine awards and placed third in team sweepstakes among all competing schools. In just two years, the team had won more than 155 awards and boasted five of the nation's top speakers among hundreds of competitors from 86 colleges.

“When I accepted the challenge of rebuilding the forensics program almost three years ago, I couldn’t have imagined how far this young team could and would go,” she said. “I love that our students are exceeding even their own expectations on both a personal and team level.” 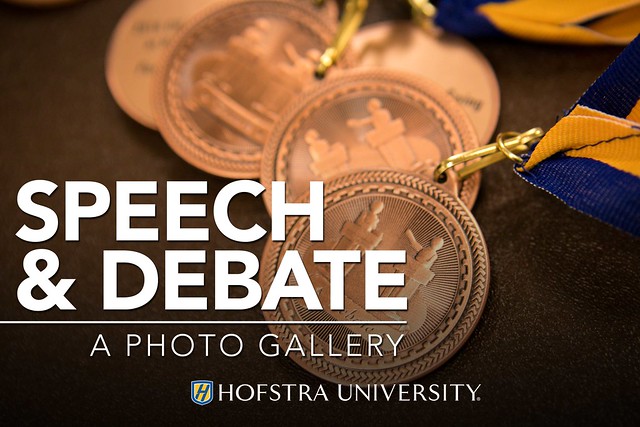 “I didn’t really know my place at Hofstra; I tried a lot of clubs and they were fun but I didn’t find a perfect fit,” said Rory Doehring, who graduated in 2015 with a degree in history. “When the debate team came around in my junior year, I immediately found a home there. The experience has not only made me more comfortable speaking publicly about my ideas, it’s made me more aware of the world around me and the experiences of others.”

Undergraduate and graduate students from all disciplines can join the team, as long as they can invest time in training. Team meetings start at the beginning of each semester, and every member must commit at least 30 minutes a week (and as many as three hours, depending on how many competitive events they’ve signed up for) to working with Dr. Robinson or the graduate assistants who make up her coaching staff, all of whom are award-winning orators themselves.

The team travels about six weekends a semester for competitions in states including Virginia, New Hampshire, Pennsylvania and Kentucky -- and it is during those hours-long van rides, shared hotel rooms, and meals together that deep friendships are born.

“I’ve made so many great friends, and they’re not just the people I compete or practice with. They’re the people I see on campus every day, that I’ll call up if I just want to hang out or grab a bite to eat,” said senior Sabrina Singh. “It’s a lot of different personalities but we all have a great camaraderie, which is a very important thing when you’re all packed into a van for several hours!”

Freshman Donovan Harvey of Laurel, Maryland, was a debater in high school and joined Hofstra’s team as soon as he arrived on campus.  His favorite events are extemporaneous speeches (in which he picks one of three current events topics, has 30 minutes to prepare, and 7 minutes to present) as well as persuasive speeches (which he can research and prepare prior to competition).

Harvey is double majoring in public policy studies and political communication, and hopes to run for office one day. “Critical thinking and thinking quickly in terms of avoiding ‘Aleppo’ moments -- those are nice skills to have,” he said.

“Practicing public speaking engages my brain in a number of different ways, and forces me to improve my ability to articulate my thoughts,” said Charles Kim ’18, a political science major from San Jose, Califoria. “This is very important simply due to the fact that communication skills are very valuable in any setting, and speech and debate helps make this skillset second nature.”

Sabrina Singh, who is studying rhetoric, philosophy and community health, wants to pursue advanced studies and research in geriatrics and dementia after graduation. “I grew up taking care of both my grandmothers, and I’ve seen myself how those issues affected them directly,” she said. “I know the skills I’ve learned from the Speech and Debate team - being able to write more clearly and present my ideas more succinctly - will carry over into any direction I take in my work.”

Alum Rory Doehring, who now works as a grant writer for the Police Athletic League, said the experience on the team was a great selling point in job interviews.

“People like to ask about it if they see it on your resume,” Doehring said, “and it tips off employers that you’re a hard worker, a good communicator, and that you’ll be open to bringing new ideas to the table and finding solutions.”