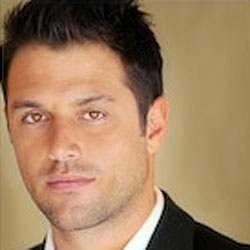 Sabin Lomac (B.A. ’03) and his cousin Jim Tselikis launched Cousins Maine Lobster, a gourmet food truck based in Los Angeles in the spring of 2012.  Cousins Maine Lobster became an instant success, delivering Maine lobster to California each day and serving traditional lobster rolls out of their food truck.  Within nine months of opening, Cousins Maine Lobster was voted the No. 1 food truck in Los Angeles, has been featured on countless TV shows, and even struck a deal with real estate mogul Barbara Corcoran on ABC’s Shark Tank.  The cousins opened their first restaurant in September 2012 and went on Good Morning America to promote their online shipping business of all Maine seafood products.

Sabin was born in San Diego, CA, but spent the majority of his childhood in Scarborough, Maine, a suburb of Portland. Raised solely by his mother, Jeannie, an actress and teacher, he was introduced to the art of performance at a young age. His talent in local plays was quickly recognized as soon he was represented by Portland Models and Talent, the state's premier talent agency at the time. Throughout middle and high school he continued to act in plays and commercials, and received a scholarship from Time Warner Cable to attend Hofstra University upon winning an acting and directing contest.

While at Hofstra, Sabin found a home at the University's New College Theatre. He took the leads in The Laramie Project, Gas, Flop Cop, The Odd Couple, The Man Who Couldn't Dance, and Suddenly Last Summer. He performed in additional off-Broadway plays in New York City, co-starred in the independent features Don't Shoot the Pharmacist and Why George, and appeared in print campaigns for Yahoo! and The Wall St. Journal, Calvin Klein, and countless others.  Sabin has also starred in The History Channel's Conquest of America: The Southeast; co-starred on Veronica Mars, Mad TV, All My Children, Saints and Sinners, and Guiding Light; and has appeared in numerous other commercials, plays, and short films.

Sabin currently lives and works in Los Angeles. He is a sports fanatic, and loves music, movies, and traveling. He cares deeply for his family and friends, and prides himself on being a fun, positive person. Sabin is an only child, an Aries, and a strong believer in tolerance and equal rights.