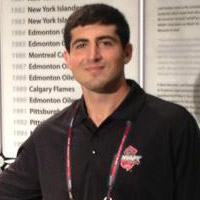 John A. Iadevaia is a versatile journalist from Long Island. He is a logger/subclipper/transcriber for the NBC Sports Network, with experience in sports research, and also works for SiriusXM in the Mad Dog Sports newsroom. He is also a contributor for Inside Lacrosse magazine, covering all levels of lacrosse across the metropolitan area, as well as a staff writer for Hockey’s Future, which tracks the development of NHL prospects and features updates on their progress from the amateur, junior levels to the pros.

John graduated from Hofstra University with a double major in radio and history, and a minor in speech communication. While he was at Hofstra, John worked for four years for WRHU, Radio Hofstra University. There he worked over 115 broadcasts as an announcer, show host, reporter, producer, news anchor, studio engineer and music DJ. He was the locker room reporter during WRHU’s broadcasts of the New York Islanders during the 2011-2012 season, as well as the radio voice for the then Long Island Lizards. In 2010 he learned the ropes at the professional level by holding three internships at ESPN Radio, News 12 New York, and WFAN.

In addition to his broadcasts, class work and a part-time job with the Hofstra Plant Department, John was very active with the Hofstra Roller Hockey Club. During his five-year career, the club grew in leaps and bounds in the National Collegiate Roller Hockey Association, reaching the NCRHA tournament twice, and was twice named the Hofstra Club of the Year. The team was also active in the community, hosting the St. Baldrick’s Day fundraiser and attending the Special Olympics.

John remains involved with the Hofstra community and takes part in alumni activities with WRHU and Hofstra Roller Hockey.