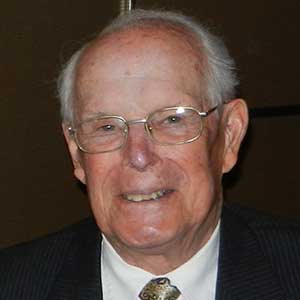 Vincent P. Amy, PG, CPG, FGS,is a career consulting geologist. With over 40 years of experience as a hydrogeologist, Vincent has performed duties ranging from the evaluation of ground water-contamination assessment programs for the Department of Energy Office of Self-Assessment at facilities in the South and West, and the development of landfill and solid waste programs for new and existing facilities, to working on geologic studies in Spain, Puerto Rico, Jamaica, and Colombia, as well as serving as an expert witness in various geology and  hydrogeology trials and hearings dealing with groundwater diversions, contamination, landfills, limestone mines, and injection wells, to name a few.

Vincent began his career in 1961 at Geraghty & Miller Inc., Consulting Ground-Water Geologists, where he worked as the company’s first full-time employee. After 10 years of dedication, Vincent was promoted to executive vice president, and opened Geraghty & Miller’s Palm Beach, Florida, office in 1974. In this role, Vincent became involved in programs such as design, permitting, and construction inspection, as well as the testing of deep injection wells for the disposal of treated sewage and industrial waste along with related geologic research and the geologic research development of geophysical logging programs. In 1984, he was appointed president and chief operating officer of the company and held this position until 1988, when he was elected vice chairman of the Board of Directors. Here, he was responsible for a full range of water-supply development and management company management activities, as well as the design and successful completion of many injection well systems. He also served as a member of the Technical Advisory Committee for the development of Florida’s Underground Injection Regulations, and co-wrote a guidance document for the U.S. Environmental Protection Agency, among many other achievements.

Vincent retired from Geraghty & Miller in 1993, and since has worked as an independent volunteer geologist for the Regulatory Office of the Corps of Engineers in Palm Beach Gardens. Over his extensive career, he has received several awards and honors, including Volunteer of the Year; Commander's Medal for the United States Army Corps of Engineers in Jacksonville, Florida; the Commander’s Medal; the Parker Medal from the American Institute of Professional Geologists; and inclusion in the 18th edition of Who’s Who in the South and Southwest. Vincent is a proud cum laude Hofstra graduate with many fond memories of the Geology Department.

Additionally, he was the Project Geologist for the Hudson Institute's Study for the creation of a shipping canal connecting the Southwest Caribbean with Pacific Ocean.  He served as a Chairman and Member of the Technical Advisory Committee of the Governor's Committee for the Sustainability of South Florida.  He was listed on the Master Roster of technical Experts of ORAU (Oak ridge Associated universities).  He was the project manager for developing groundwater supplies for the AT&T Long Lines Department hardened cable system to provide a means of communication in event of a nuclear war.

My interest in Geology really got started when I was assigned to  a special U.S. Army Unit based in Ethiopia during the Korean war.  There I was exposed mountainous terrain and the unique Geology which fostered my interest.