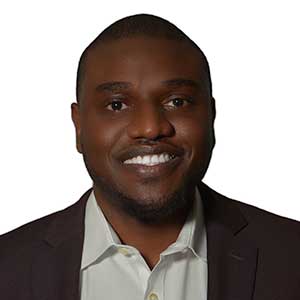 Ezron Bryson is entering his fourth season with the New York Jets as an assistant athletic trainer, where he is responsible for the day-to-day health and wellness of the professional football players. Prior to working for the New York Jets, Bryson was an associate athletic trainer for the University of Georgia and worked primarily with the Bulldogs' men's basketball program. He implemented corrective exercises with the existing Fusionetics platform to assess and correct imbalances and insufficiencies. He also served on the Graduate Assistant Selection Committee and spoke to youth through the UGA Archway program.

Prior to his stop in Athens, Georgia, Ezron spent three years as the assistant director of sports medicine at Manhattan College, where he served as the primary contact for the men's basketball team, providing oversight for the baseball and volleyball programs. Ezron supported all 19 of Manhattan's athletics programs while coordinating student-athletes' schedules for nutrition and chiropractor and physician appointments. He was also responsible for student work-study employment budgets and schedules. In addition, Ezron worked on the sports medicine staff for the University of Michigan and the New York Jets. From 2010 through 2012, he was a graduate assistant athletic trainer with the Wolverines, providing care, prevention and rehabilitation for student-athletes. Ezron oversaw special equipment and pads for student-athletes and maintained custom and non-custom knee braces, game bags, and practice trunks. He traveled with the football programs to two bowl games, where he helped coordinate athletic training set-up at practice sites and team hotels. While in Ann Arbor, Ezron was named Michigan's 2011-2012 Clinical Instructor of the Year. He also served as a season athletic trainer for the Jets from 2009 to 2010, where he helped develop preventive and rehabilitative programs for injured athletes, documented athletes' treatment sessions, rehabilitation programs, and daily progress, and oversaw athletic training room equipment and inventory.

Ezron’s efforts contributed to a stellar run of team success. Manhattan captured 2014 and 2015 MAAC Championships and participated in the 2014 and 2015 NCAA Tournaments. The Wolverine Football Program played in the 2011 Progressive Gator Bowl and won the 2012 Allstate Sugar Bowl. The Jets also advanced to the 2010 AFC Championship Game.