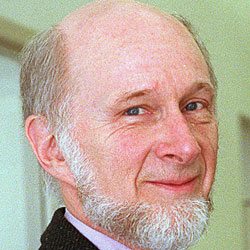 George Vecsey (BA ’60, HND ’90) has been a journalist for more than 50 years. From 1982 through 2011, he wrote the sports column for The New York Times and is current a contributing sports columnist for the Times. He has written more than a dozen books, including five best-sellers. His latest book, Eight World Cups: My Journey Through the Beauty and Dark Side of Soccer, will be published by Times Books/Henry Holt & Co. in May 2014. He will appear at the upcoming conference at Hofstra titled Soccer as the Beautiful Game: Football's Artistry, Identity & Politics (April 10-12, 2014).

Vecsey says his best gift from Hofstra, beyond a good education and a career, is his wife. He and his co-editor of the Hofstra yearbook, Marianne Graham, an artist and teacher, were married in October of 1960 and have three children and five grandchildren. Marianne Vecsey made 13 trips to India as a volunteer with a childcare agency, and has escorted nearly two dozen children to the United States for adoption, including one grand-daughter.
The son of two journalists, George Spencer Vecsey, attended Jamaica High and enrolled at Hofstra in 1956, working as a student publicist in the Hofstra athletic department, covering memorable Hofstra coaches Butch van Breda Kolff and Howdy Myers. He also began working at Newsday, covering several Yankee games at the age of 20, days before his graduation with a BA in English.

In 1968 Vecsey was hired by the Times, first covering sports, but in 1970 he was recruited to become a national correspondent for the Times, based in Louisville, Kentucky.  Later he was a metro reporter from 1973 to 1976 and for the next four years he covered religion, including Pope John Paul II's first trips to Mexico and the United States. He also interviewed the Dalai Lama twice, which he calls the most memorable assignment of his career.

In 1980 Vecsey returned to sports as a feature writer and was named to write the “Sports of the Times” column upon the death of Red Smith in 1982. Leaning toward international sports, Vecsey has covered eight World Cups, most recently in South Africa in 2010, as well as all the Summer Olympic Games beginning with Los Angeles in 1984 through Beijing in 2008.

Among his other books are Stan Musial: An American Life; Baseball: A History of America's Favorite Game; and Loretta Lynn: Coal Miner's Daughter (co-author with Loretta Lynn), which was later made into an Academy Award-winning movie. He is also proud of One Sunset a Week, the story of a radical coal-mining family during the Nixon years, and Five O’clock Comes Early, written with Bob Welch.

George and Marianne Vecsey live in Port Washington, Long Island. Their three children have all worked in journalism. Laura Vecsey has been a sports columnist and political columnist with four papers; Corinna V. Wilson, an attorney, is vice president, programming at Pennsylvania Cable Network (PCN); and David Vecsey is a copy-editor for the magazine section of The New York Times.

George Vecsey was awarded an honorary doctorate from Hofstra University in 1990.