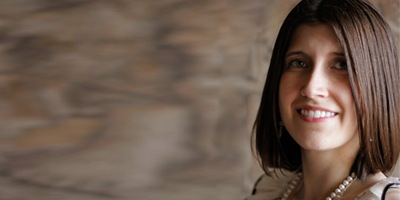 Ten years ago, when Claudia Gabel ’00 was handed her Master of Arts in English and American literature from Hofstra University, she thought she would walk off the stage and in the direction of a Ph.D. Instead, she moved to New York City and became a children’s book writer and editor.

Claudia came to Hofstra one year after graduating from Binghamton University with a B.A. in literature and rhetoric, hoping to pursue a career in academics. She’d loved books ever since kindergarten, and enjoyed talking about the power of prose with anyone who would listen to her. Naturally, she thought of becoming a professor — she’d be able to discuss books with people all the time … and get paid for it!

However, Claudia had another passion that was just as great — creative writing. While she attended Hofstra, she wrote her first full-length novel, and, in between classes, she dreamed about sharing her stories with an audience that went beyond her family and friends.

After leaving Hofstra, the time had come to decide on whether to apply to a Ph.D. program or get a job. Claudia sought out her teachers at Hofstra for advice. When told of the harsh reality facing Ph.D. students — few job opportunities and shrinking college budgets — Claudia chose to pursue her interest in books in a totally different fashion: through the publishing industry.

In late 2000 she took an editorial assistant job at HarperCollins Publishers, where she worked behind the scenes with two senior editors on a bunch of best-selling books, including Have a Nice Day! by WWE wrestling superstar Mick Foley and To Hell and Back by recording artist Meatloaf. From 2001 until 2002, she was an assistant editor at Crown Publishers, where she helped bring more books to life, including memoirs from celebrities like KISS front man Gene Simmons and New York Yankees shortstop Derek Jeter.

In 2003 Claudia became an editor at Alloy Entertainment, a multimedia company that develops books, movies, and TV shows for teen audiences, including the CW’s Gossip Girl and The Vampire Diaries. There, she created and edited several best-selling books, including the Summer Boys series by Hailey Abbott. In 2005 Claudia moved over to Random House Children’s Books as an editor and continued her work on novels for teens and middle grade readers — a genre of books she has really grown to love.

In 2007 Claudia’s first Young Adult series, IN OR OUT, was published by Scholastic/Point. The four books are loosely based on her life and feature two best friends who grow apart during their freshman year of high school. Teen readers e-mail Claudia almost every day, thanking her for writing about how to deal with cliques … and crushes on boys.

Currently, Claudia is a senior editor at Katherine Tegen Books, and her next novel, Romeo and Juliet and Vampires, will be published by HarperTeen in August 2010.

This summer she will also be teaching a writing class for Mediabistro.com, a career site for media professionals. So, in a way, she got to be a professor after all.