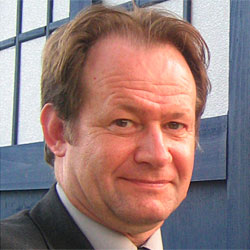 Jeffrey Breslauer (B.A. ’76) is an actor, puppeteer, writer, voice-over artist – and even a ballroom dance instructor. After graduating with a degree in communications and a concentration in broadcasting from Hofstra University, Jeffrey began his career in New York in the mid-1970s. His puppeteering work can be seen in The Muppets Take Manhattan and The Muppets at Walt Disney World.

At EPCOT, Jeffrey played "The Dreamfinder," who manipulated Figment, the little dragon star of Journey into Imagination. He also voiced and manipulated the "Spider" mascot for Scholastic Publishers' video series of Math Place Programs for first and second graders.

His vocal talents have been heard in commercials, industrials, TV shows, audiobooks and theme parks, ranging from the sounds of a termite to a cartoon super hero. One of his favorite jobs was voicing "The Joker" for Six Flags Theme Parks. Jeffrey had the pleasure of adding more than a dozen voices to his audio repertoire when he performed the audio book versions of Glenda C. Finkelstein's sci-fi novels, The Edge of the Universe, and Nemesis Rising. He also voiced and narrated the sci-fi/comedy audiobook trilogy Cheese Runners, Cheese Rustlers and Cheese Lords, all written by Chris Jackson.

Another special project Jeffrey participated in was Sounds Abound On All Hallow's Eve, a spellbinding aural feast created with his partners at JMJ Entertainment, Jeff Evans and Mark Priest.

As a writer, Jeffrey is very proud of his newly published children's book Abner the Clown. Brightly and brilliantly illustrated by Linda Campbell, the book tells the tale of Abner as he relates to children, in rhyme, about his low self-esteem. The picture book goes on to describe how Abner's friends help him to be proud of himself, and that they love him for who he is.

In addition to performing on stage in such plays as Breaking Legs with Frank Gorshin (TV's "Riddler"), Jeffrey's work has graced several popular themed attractions in Orlando, FL, including Walt Disney World, Sleuths Mystery Dinner Theatre (in roles ranging from a detective to a maid to a stuttering florist), and Arabian Nights (as the Genie).