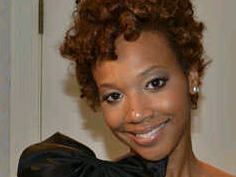 Tamika Blaize (B.A. '97) is the founder of A Princess for a Day (APFAD), a 501 (c) (3) nonprofit organization devoted to advocating the importance of education. APFAD honors deserving students from impoverished communities with a magical prom. Honorees receive a dress donated by a celebrity and complimentary limousine, photographer, makeup artist, hair stylist, and tailoring services. A television producer by trade, Tamika has produced daytime talk shows, court shows, and game shows such as The Queen Latifah Show, The Tyra Banks Show, and Divorce Court.

After graduation, Tamika worked at WNYW and had a brief stint at CNBC as a tape associate on the overnight shift. A lover of fashion, she then ventured off to Saks Fifth Avenue to enter its renowned Executive Training Program. She was offered a job in the Women's Accessories Buying Office. A few months later, fellow Hofstra alumna Ayanna Bascombe (B.A. '98), now an Emmy Award-winning producer, told her there was a job opening at The Queen Latifah Show. Tamika interviewed and was hired as the receptionist. Tamika decided to take the job because she wanted to get her foot in the door, and she had no doubt that she could work her way up.

A few years later Tamika decided to try something new and moved to Los Angeles, CA, without a job. Within three months, she was hired at a talk show and she has worked steadily ever since, holding positions as senior producer and, most recently, coordinating producer at Divorce Court. In 2008 Tamika moved back to New York. At the end of 2009 she decided to try to see if her idea for APFAD could become a reality. She made a couple of calls to a few industry contacts and got her first dress donation for prom season 2010 from Oscar nominated actress, Grammy Award-winning rapper, and philanthropist Queen Latifah. Since then she's received donations from Good Morning America anchor Robin Roberts; supermodel Tyra Banks; mogul and model Kimora Lee Simmons; actresses Vanessa Marcil, Tichina Arnold, and Paula Patton; Fergie of The Black Eyed Peas; and many more celebrities! In 2010, APFAD honored one student, and six students were honored in 2011.

A philanthropist at heart, Tamika has been a volunteer for more than 10 years at organizations like God's Love We Deliver and New York Cares. And although she never imagined starting her own organization, she genuinely believes her career as a television producer has prepared her for the herculean task of running an organization. Tamika tells people the idea for APFAD came from God, as she woke up out of her sleep to write down the entire concept in a notebook. On a daily basis, Tamika combines her love of fashion, the skills she learned as a television producer, and her genuine desire to help others.Tamika is currently a producer at the tv show Judge Mathis in Chicago.