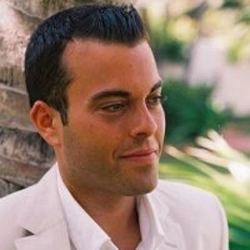 For quite some time, it has been one of Aaron’s ‘bucket list’ dreams to be included in Hofstra’s Alumni of the Month feature. “After reading the amazing alumni selections time after time, it has motivated me to the potential of perhaps one day being considered myself,” Aaron said.

During his freshman year at Hofstra, having no clue what he wanted his profession to be, one of his marketing professors told the class about an internship at Virgin Records. Aaron was the only one who approached the professor at the end of class. Ultimately, he was accepted for this internship, and he credits this professor for starting his long and successful path in the music industry.

Since then, Aaron has been responsible for marketing, strategic partnerships and promotions for legendary music artists, including Britney Spears, Kid Rock, Backstreet Boys, Katy Perry, *NSYNC, R. Kelly, Janet Jackson, Rolling Stones, Justin Timberlake, Queen, Lenny Kravitz, Matchbox 20, and U2. He has held executive roles at some of the great music industry corporations, including MTV, Atlantic Records, Disney Music Group, Sony/BMG, and Virgin Records (having it all start there as an intern from Hofstra in 1994!). During his time as vice president at Disney, he handled artists such as Jonas Brothers, Miley Cyrus, Selena Gomez, and the cast of High School Musical. He has managed the No. 1 selling Latin teen group, RBD (as well as working as the executive producer of their 2007 U.S. tour).

Aaron participates in several music industry charitable organizations to help give back to the community, including the TJ Martell Foundation, Lifebeat, and others. He has received several awards and acknowledgments for his accomplishments, and often speaks on industry-leading panels as an expert.

He thanks Hofstra for discovering an internship that created and started his path, and for countless other positive factors Hofstra has given to him. He is proud to be a Hofstra alumnus and to be considered a top music industry executive, working and traveling around the work with some of the all-time top talent (and it all started in Hempstead!).