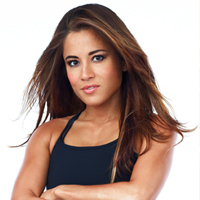 The newest fitness trainer on NBC’s hit show The Biggest Loser, Cara Castronuova ’04 is a two-time Golden Gloves winner who was once ranked nationally by USA Boxing. Cara was born in Elmont, New York, and began boxing at the age of 5 in the family garage with her father, a former Marine.  She wrestled in high school and college, and graduated from Hofstra University with a Bachelor of Arts in communications.

Cara first entered the boxing arena as a youth boxing trainer, and later began competing locally as a boxer, winning her first fight in 2002 at the New York Empire State Games in Syracuse. She also volunteered for a government-funded program for troubled youth and taught program participants the virtues of boxing. Later, while working as a personal fitness and boxing trainer at sports clubs in the New York area, she began to use fighting and boxing to encourage her clients to find their “inner warrior.” While training clients, Cara continued to box competitively, winning a pair of “Silver Gloves” in 2004.  Determined to do better, Cara returned to the ring one year later and won her first New York Golden Gloves championship at Madison Square Garden in 2005. Following the win, she started competing nationally and was ranked No. 2 in the nation by USA Boxing. She went on to win numerous titles, such as the New York State Amateur Boxing Championship, the Metros, and the Empire State Games, as well as her second Golden Gloves title in 2006 at Madison Square Garden. Certified as a boxing coach by the New York State Athletic Commission, she is also a personal trainer certified by the ISSA (International Sports Sciences Association). Additionally, she has worked as a reporter and fitness writer for New York and boxing press outlets, and as an announcer and sports commentator for various boxing venues throughout New York City, such as Madison Square Garden.

Cara has always been a fighter. She has overcome challenges and adversity in her work and in her personal life. Her father passed away when she was a teenager, and she lost her mother four years ago..  She has had to face much adversity-- competitively and personally.  Her father, who was obese, passed away when she was just a teenager.  Her mother passed away from a car accident four years ago. Cara’s struggles have instilled in her a spirit of dedication, hope and determination. They have channeled her passion for competition and training, and have motivated her to become a role model for her family, friends, and the Hofstra community.