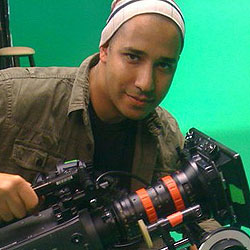 Since Michael Cruz's (B.S. '02) initial exposure to the world of film and television, he has made it his mission to master the complete process of visual production in a “creative” way. Throughout his 12 years of experience in the industry, Michael's talent for directing has enabled him to work on a variety of projects ranging from Web-based media to television commercials. In 2006, he co-founded Hiccup Media, a full-service creative content production company, with clients such as Sony, T.J. Maxx, MTV, Procter & Gamble Co., E*TRADE, Comcast Corp., TLC, and Dave Matthews Band, just to name a few.

Michael came to Hofstra, following in his older sister's footsteps. After a meeting with an academic counselor during which he professed his interest in the buttons found in the radio control room, Michael decided that a career in production was for him.  He continued with his studies, immersing himself with the academic community and assisting fellow students while working as a teacher's aide.  By the time he graduated in 2002, Michael had moved into visual production and completed a double major in video/television and film.

During his last year at Hofstra, Michael directed the programs' largest live production by the Class of 2002. There, he met an R&B artist for whom he did freelance work following graduation.  While working as a video editor at Burnpeak in Connecticut, Michael worked on a special video project for Christopher Reeves' birthday, where he was also a guest at what would be Reeves' last birthday.

In addition to Burnpeak, Michael has worked at Connecticut Yankee, AOL Music and Grey Worldwide. Through creative planning and his relationship with CT Yankee, Michael was offered their Avid Editing system, enabling him to start his own creative content production company.  In 2006, just four years after graduating from Hofstra, Michael founded Hiccup Media with Rob Simone, a fellow colleague from Grey Worldwide.

When asked why they chose name “Hiccup Media,” Michael responded,  “We were fascinated by the mystery behind a hiccup … Even though you try to get rid of it, it keeps coming back. A hiccup has tenacity, which represents our drive.”  Five years since the birth of their company, Hiccup Media maintains a growing clientele and strong case studies.