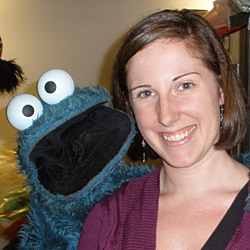 Over the last four years, Kara Koch’s co-workers have included Elmo, Oscar the Grouch, Kermit the Frog, Bert, Ernie, Big Bird, and even Mr.Snuffleupagus.  Kara works as a production coordinator in the global production department of Sesame Workshop, the nonprofit organization behind Sesame Street. As coordinator, she is responsible for production activities related to international properties such as Jalan Sesama in Indonesia and Sisimpur in Bangladesh. Kara works closely with the production teams in these countries to ensure the Sesame brand is successfully integrated with local content.

Prior to joining the global family in 2009, Kara was part of Sesame’s special projects team, helping to produce various outreach programs, including Let’s Get Ready, Coming Home, and When Families Grieve. These award-winning programs, featuring celebrities such as Queen Latifah and Katie Couric, offer children and families support on topics such as emergency preparedness, military deployment and injury, and the death of a loved one.

Kara earned a Bachelor of Arts in audio, video, and film in 2007, and graduated from Hofstra Honors College. She engineered the “Gone Country” radio program on WRHU 88.7 FM, Radio Hofstra University, and represented the Pride as a mascot for four years.