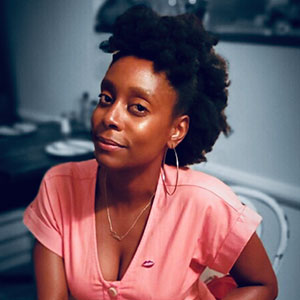 Past curatorial work includes the Adaptable Apple series (a multidisciplinary series with visual artist Michelle Golden) and the 2019 Dance NYC Symposium along with Stephanie Acosta.
​
She advocates for dance equity as a member of several art collectives such as the Artists of Color Council under Movement Research. As a creative consultant, she has ​project-managed Katie Workum’s latest project, Anna, Darrin, David, Eleanor, jess, Katie, Leslie & Weena: The Door’s Unlocked, in February 2020.

Born in Barbados and raised in Brooklyn, NY, Harris is currently the programs manager at CPR - Center for Performance Research. She graduated from Hofstra University (on scholarship) with a BA in Dance.