"My fascination with letting images repeat and repeat ... manifests my belief that we spend much of our lives without observing." - Andy Warhol 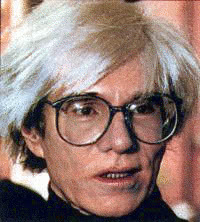 Andy Warhol (born Andrew Warhola in 1928) studied pictorial design at the Carnegie Institute of Technology in his hometown of Pittsburgh, Pennsylvania, from 1945 to 1949. After moving to New York City, he worked as a commercial artist and illustrator for magazines and newspapers. In the 1950s, he shortened his name to Warhol.

Beginning in the 1960s, Warhol created numerous works of art by appropriating images from popular culture. He pared them down to their essential elements while he created repetitious images of these objects or individuals, such as Campbell’s soup cans and Marilyn Monroe. He was also inspired by advertisements and comic strips; his style became known as Pop Art. Warhol worked in various media: painting, printmaking, photography, sculpture, and film. He was especially interested in using the processes of commercial printing such as screenprinting, stamping and stenciling in his art to emphasize the concept of mass production.

By the 1970s, Warhol was established as a major international artist celebrity. At his studio, “the Factory,” he continued to create paintings and worked on commissioned portraits. In addition to other publications, he published Interview magazine. His artwork has been and continues to be exhibited at prestigious museums and institutions worldwide.

After his death in 1987 following routine gall bladder surgery, The Andy Warhol Foundation for the Visual Arts Inc. was established, and in accordance with the terms of his will, its mission continues to be the advancement of the visual arts. Launched in 2007, the Andy Warhol Photographic Legacy Program has donated more than 28,500 photographs to American college and university museums. As a participant since 2008, the Museum has received donations of 153 photographs (Polaroids and gelatin silver prints) and nine screenprints from the Foundation. In 1989 a major retrospective of his work was mounted by the Museum of Modern Art, New York. As a lasting legacy to his work and influence, The Andy Warhol Museum opened in Pittsburgh, Pennsylvania, in 1994. In fall 2017, the Hofstra University Museum of Art mounted an exhibition of his works from our collection.

As part of our Second Fridays Virtual Public Program, Acting Director and Chief Curator Karen T. Albert used photographs and screenprints from the Museum’s collection to provide a view into Warhol’s working methods and artistic process in which photography played an integral role. View the recording of this event.