Volunteer opportunities often arise during the field season and sometimes during the academic year depending on the current CfPA project. Volunteer positions are unpaid but rewarding experiences. People of all ages, backgrounds, and interests are welcome to volunteer, and we especially encourage participation among local stakeholders or anybody who directly identifies with the current project. In addition to descendants and local organizations, primary and secondary students, summer school groups, and continuing education programs find volunteering to be a productive and worthwhile learning experience. 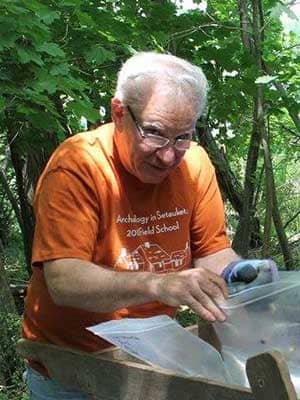 I would like to share with as many people as possible the thrill, excitement and pleasure of my being exposed to archaeology. Once I was advised that there was going to be an archaeology dig on Long Island, I was elated. I thought perhaps, at best, I could look over their shoulders to see what the professor and his class were up to—I could even go and pick up lunch just to be that much more of a help to the team. However, I was immediately briefed as I was handed a booklet, then furnished with a trowel and bucket — in an instant became one of them!

Now for the real work as we set off to the c.1700 Thompson House in historic Setauket. The backyard of this once magnificent messuage had contained a c.1800 summer kitchen which was no longer. As we laid out the one meter by one meter grid patterns across the grass, over the buried foundation, we all knew exactly what had to be accomplished. With trowel in hand I began to excavate what was to become an almost three-foot hole, stopping only when we struck water and could dig no longer. Scraping, sifting, sampling, measuring, cataloging — every artifact was sorted as best as it could be in the field, which we would later wash, sort and weigh.

Once one comes across an artifact, such as a coin, an arrowhead or a button, realizing that the last time it saw the light of day was when it was carried by its former owner; the Indian, the colonist or the slave who possessed it last. That thrill is one that will never leave you, but it will keep you coming back for more.