If Dr. Mauro Caputi wasn’t an associate professor of engineering, he’d probably be an entertainer.

Caputi is the architect of the course Designing the Human-Made World, an introduction to engineering design for first-year students. ENGG 15 (or Design 15 as he calls it) isn’t your typical engineering class.  It’s an animated and interactive TV series (featured on its own fictional television station – WDSN 15) that is born of Caputi’s childhood passion for television, radio and movies.

As a young boy, Caputi recalls sneaking into his parent’s basement far too early on Saturday mornings  to watch classic cartoons and educational shows on an old black and white television. By the time he was 12, he was obsessed with radio, even using his father’s reel-to-reel tape recorder to record himself as a disc jockey. As a teenager, he listened to comedy albums over and over until he could recite them verbatim.

“I like the personal interaction the most,” he said. “Next, I enjoy performing, presenting, and instructing, having quite a bit of fun, and making their time as enjoyable as I can so that they listen, think, and grow.” 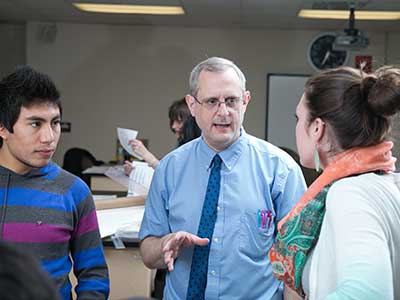 Thirty years later, Dr. Caputi has turned his love of entertainment into a tool to engage, educate and connect with undergraduate engineering students.

“I learned a lot of interesting history watching shows like Sunrise Semester and Biography with Mike Wallace,” he recalls.   “I also learned so much about comedic timing from Marx Brothers movies, and TV shows like Abbott & Costello.”

At the Design 15 season premiere each September, Professor Caputi takes the stage of the Helene Fortunoff Theater and greets his audience with the fanfare of a game show host.

Each class features flash animations, music, movie clips and most importantly, audience participation.    The course is a combination of in-class lectures and labs. During the lab sections, students work in teams to brainstorm alternative designs and construct working prototypes in a certain period of time. During the season premiere, Caputi introduces the first lab project, calling the segment “The Design is Right” – a takeoff on the game show classic “The Price is Right”.

Design 15’s season finale is the Grand Design Challenge – an exercise aimed at teaching students the value of teamwork, cooperation, and friendly competition.

Students are divided into teams that, with a small budget and limited supplies, compete in front of an audience to build projects such as a mechanical system that can launch random objects like a hard-boiled egg or a bagel. The competition plays out like a reality show.

Designing the Human-Made World made its debut in fall 2005, after the Department of Engineering asked Dr. Caputi to transform its Introduction to Engineering course so it would better meet the needs of freshman students.

“They wanted to have a first year engineering course that would excite and energize students about engineering as well as increase the retention rate,” he said.

Currently in its 13th year (19th season), Design 15’s curriculum is still centered on the design of human engineered mechanical devices and the laws of science that dictate how they are built, but Dr. Caputi has incorporated TV-host-style lectures, along with hands-on project labs to encourage student participation and teach what are known as “durable skills” such as informed design, teamwork and communication.

“Informed Design is a process that enables you to enhance your own related knowledge and skill base before attempting to suggest a solution,” he explained.  “Teamwork is a vital professional competency that needs to be instilled in all engineering students to help them coordinate their skills together to face the unique challenges of their future. And, communication is another essential professional competency required of engineers as they interact with colleagues in the classroom and the workplace.”

In addition to Design 15, Professor Caputi has developed curriculum for more than fifteen engineering courses from Electric Circuits and Random Signal Analysis to Electrical Science and Electronics Laboratories, and written eight engineering course and Laboratory manuals.

And after thirty years in education, his enthusiasm hasn’t waned.

“I like the personal interaction the most,” he said.  “Next, I enjoy performing, presenting, and instructing, having quite a bit of fun, and making their time as enjoyable as I can so that they listen, think, and grow.”

Dr. Mauro Caputi in the news