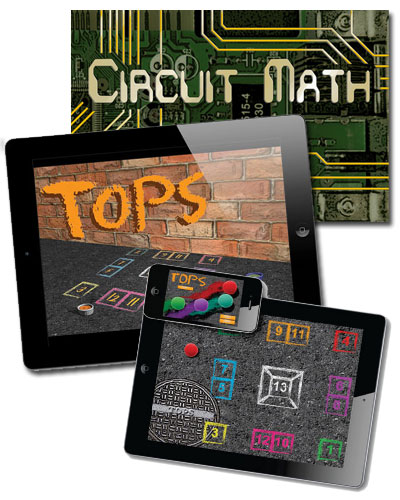 Dr. Roberto Joseph is working on several initiatives that use gaming and game development to teach math in elementary and middle schools, including a project supported by a $1.2 million National Science Foundation grant…

Tapping into the tech and graphic design talents of two Hofstra students, Joseph developed a math app called TOPS, based on a street game he played growing up in Brooklyn. He is also running a weekend program to teach game design to local middle school kids. In fall 2013, he became founding director of Hofstra’s new M.A. program in Technology for Learning.

Dr. Joseph’s primary research interest centers on understanding how the combination of culture and educational games can improve student learning.  In the rush to embrace digital technology in the classroom, Joseph says, there has been too little attention on how to use it and which types – tablets or mobile apps, for example - work best in which environments.

"When kids are making apps, it’s amazing. It’s a comfort zone for them… What you see in them is a sense of ownership. They know what they want, so it’s a matter of helping them get there."

In particular, Joseph has focused his attention on how to create educational games that capture the imagination of students from a variety of backgrounds, in particular minority children who attend urban schools. He has developed two apps – TOPS and Circuit Math – with the help of a graduate student in Hofstra’s MBA program with a background in information technology development, and a recent alumna of the fine arts-design program who is a specialist in computer-based graphic design. Both apps teach elementary-age students basic math skills, TOPSthrough a street game and Circuit Math via puzzle-solving.

But the best way to develop math apps that are relevant to students is for the kids to do it themselves. So for the last four years, Joseph has been working on a proposal to the National Science Foundation to create a game-based curriculum that will guide school districts about the best ways to get kids to make games that are meaningful to them, and at the same time educational.

“We’ve done tons of research around playing games, now the direction is more – what does it look like when kids create games?” That NSF project, called iDesign, is a partnership between Hofstra and ten middle schools in New York City and Long Island that will engage 450 6th-9th graders and their teachers in after school game design clubs.  During the summer, their teachers will trained on how to bring mobile and digital technology into the classroom.

“They live in the game world. They know this stuff. That part isn’t difficult. Finding issues that they find meaningful is the challenge. We want kids to make games that come from what’s happening in their lives now.”
He’s also launched a Math App Academy (link to mathappwebsite), funded with a $30,000 Innovation Generation grant from the Motorola Solutions Foundation, in which 50 Long Island middle school students will spend their Saturdays at Hofstra’s School of Education learning how to develop apps.

Once engaged, learning mathematical concepts and computation skills isn’t work – it’s a means to an end, namely building the game they want to play  . “They don’t have a problem learning it because they’re thinking – I want my ball or my character to move from this point to that point and how do I do that? Now they’re motivated to learn math to make it happen.”