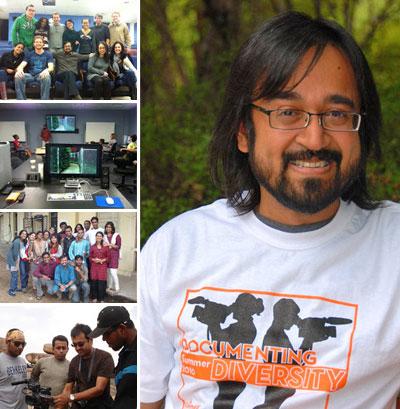 “My work is driven by the belief that electronic media is a powerful tool in shaping and empowering communities – whether they are residing in high schools, colleges, or in neighborhoods,” Kumar says.  His commitment is evident not only as a teacher, but also as a director of several Hofstra film and media programs that benefit students and nonprofit organizations around Long Island and New York City. His own upcoming projects include a documentary that he worked on while a Fulbright scholar in India, slated for release this summer.

"My work is driven by the belief that electronic media is a powerful tool in shaping and empowering communities – whether they are residing in high schools, colleges, or in neighborhoods."

His work is focused on engaging media production students in community advocacy issues.  He teaches a senior capstone course known as Media Action Project, in which students partner with nonprofit organizations and learn how to use media to stimulate change in society.  Since its inception, the program has successfully produced over 25 videos for community-based groups in the New York metro area.

“My research and practice are closely aligned.  Whether it is for documentary work, for advocacy films, or for social action through media, I use research towards the production of public media,” he says.  “In the classroom, this translates into helping students understand their agency as media citizens and providing them with the intellectual tools and training necessary for participating in public media projects either in documentary form or through partnerships with community-based organizations.  Since I am also a practitioner of these types of media projects, my teaching and student mentoring often borrows from my experiences and background in doing collaborative media work.”

Most recently, Kumar was also awarded a $25,000 grant from the Long Island Community Foundation for a collaborative electronic media training project. The funding will allow Lawrence Herbert School of Communication students and faculty to work closely with Long Island nonprofits to provide capacity-building in electronic and social media initiatives.

As a Fulbright scholar, he taught a course on documentary production to graduate students at the University of Hyderabad in Andhra Pradesh, India, and challenged the class   to complete an advocacy project for a local conservation cause.  While in India, he also completed research on a documentary that follows the life of “reverse migrants” – Indian high-technology workers whose jobs were moved to India from the United States.  “Software from the Hard Rocks,” slated for release this summer, explores how globalization transforms our sense of place and home, he says.

Kumar has been recognized for several films championing grassroots advocacy, including “The Community I Serve,” which called for the humane treatment of those with mental illnesses by law enforcement.  It won “Best of Festival” and the “Award of Excellence” at the 2009 Festival of Media Arts by the Broadcast Education Association, and honorable mention a the Columbus International Film and Video Festival.

His 2002 documentary, “Raising Our Voices,” addressed hate-crime victims and has been screened at the Smithsonian Institute, the Dallas Asian-American Film Festival, and more than 200 academic institutions and community-based organizations. In 2003, “Raising Our Voices” was added to the Library of Congress’s permanent collection of media related to the September 11 attacks on the World Trade Center.

Currently he’s working on a web documentary titled “Making Kosovo,” which looks at the aspirations of average citizens in a country torn by violence, genocide, and internal corruption.