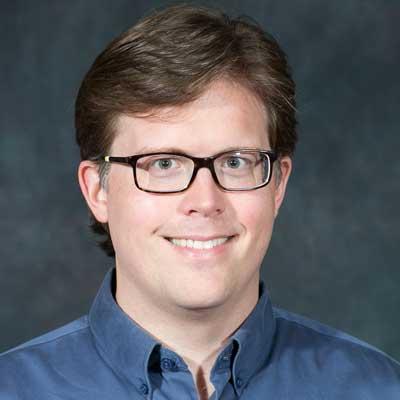 Dr. Scott Lefurgy, assistant professor of chemistry, is as comfortable singing the Periodic Table of Elements as he is teaching it. He celebrates a "Song Day" in his biochemistry classes, where he encourages his students to perform parody songs and skits about science. Finding the fun in science and making difficult concepts accessible is his M.O.

As a teen, Lefurgy spent his summers at the prestigious Interlochen Arts Camp in northern Michigan, and he later received a full scholarship to the Voice Performance program at the University of Michigan School of Music. He was similarly inspired in his high school science classes and by participating in the Science Olympiad.

When it came time to enroll in college, he was torn. "I didn't want to be limited," he said. "I wasn't ready to decide at age 17 on one or the other. I thought, ‘why not check both boxes?' So I went to University of Michigan and split my time equally between music and science."

Ultimately the time came when Lefurgy had to choose which he would make his profession.

The students are serious and engaged. Many are willing to work very hard and would be among the elite at any of the greatest universities in the country. To be able to engage with this level of student makes my job very rewarding. Some of our chemistry and biochemistry research students go on to top graduate and medical schools,” including Harvard, Penn, Princeton, Johns Hopkins, Weill Cornell, and Wesleyan University, only in the past four years.

"The decision to move forward in science was not easy," he recalled. "But by my fourth year, I concluded that while music was something I really loved to do, it wasn't something I would love as a career. One of the things we were told in music school was that if you could do something else – you should. I loved music, and I wanted to keep loving music, so because I had another aptitude it made sense to pursue a career in science."

Lefurgy credits one of his professors, Brian Coppola, for inspiring him to follow a path to academia. He says Dr. Coppola, an organic chemistry instructor and "one of the great minds in chemical education" helped shaped the teacher he is today.

Lefurgy enjoys the freedom he has at Hofstra to teach, research and incorporate his love of music into the classroom. "I have colleagues and an administration who are very supportive, and I have the freedom to teach the way that I want to," he said. "We have state-of-the-art scientific instruments to train our students. They are getting an education and skills they can transfer directly into the workplace or into graduate school.

"The students are serious and engaged. Many are willing to work very hard and would be among the elite at any of the greatest universities in the country. To be able to engage with this level of student makes my job very rewarding. Some of our chemistry and biochemistry research students go on to top graduate and medical schools," including Harvard, Penn, Princeton, Johns Hopkins, Weill Cornell, and Wesleyan University, only in the past four years.

Lefurgy also has nothing but praise for his post-baccalaureate and pre-physician assistant students.

When asked if he has a teaching philosophy, Lefurgy references the writing of Dr. Wayne Becker, a botany professor from the University of Wisconsin who put his research interests aside to focus on undergraduate teaching and on the recruitment and retention of students of color and from economically disadvantaged backgrounds. Lefurgy subscribes to Dr. Becker's comparison of teaching to a three-legged stool.

Lefurgy explains: "The first leg is competence. Whenever I go in front of a class, I really have to know my stuff. I have to know it one level deeper than I'm going to be teaching it, so I can address questions that arise from student curiosity.

"The second leg is clarity. If I know everything, but I can't present it clearly, it's not worth anything. I need to be able to present the material in a way that students can understand it. I often use a constructivist approach to build on what the student already knows or has experienced and teach by analogy. For example, I would compare glycogen regulation to an ATM or fatty acid synthesis to a game of tether ball. 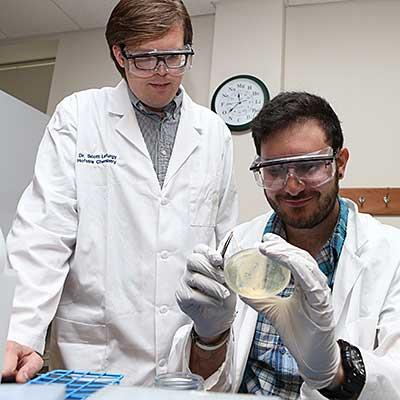 "The third leg is caring, because ultimately the students want a human presence both in and out of the classroom, someone who will say hello to them in the hallway and ask how they're doing. Someone who knows their name, who knows their story, who is concerned about their well-being. I notice when they're not in class and I call them out on it. Sometimes that opens up a conversation and reveals that there is a deeper problem. Then I can direct them to where they can get help or I can provide some perspective that might reduce their anxiety."

In the chemistry department, Lefurgy is known for his Song Day. At the end of each semester, students can write and perform a song about science for extra credit.

"It has become quite a phenomenon," he said. "For the past five years we have had at least 20 student-written and performed songs each semester. Almost 3/4 of the students participate. It's a great opportunity for them to do something funny or whimsical, and if they don't want to sing, they can do a poem or a comedy skit. Points are based on artistic creativity and scientific integrity."

Though Lefurgy chose to pursue a career in the classroom, he still finds time for the stage. He continues to perform with the Brooklyn-based Regina Opera and the Roman Borgman Opera Theatre, as a soloist with the Staten Island Philharmonic, as a choral section leader at Irvington Presbyterian Church, and as a member of the Clarion Choir directed by Steven Fox, with whom he appears on the 2017 Grammy-nominated CD Passion Week.

When he's not teaching or singing, Lefurgy is engaged in his research on antibiotic resistance. "You know how you aren't prescribed penicillin anymore when you go to the doctor? That's because most microbes are resistant to penicillin," he said. "I study beta-lactamase, the enzyme that breaks down penicillin in bacteria and is responsible for this resistance. The goal of my research is to use a structure- and function-based approach to understand how enzymes have evolved to break down different kinds of antibiotics."

Earlier in his career he researched the P99 beta-lactamase enzyme that identified a novel mutant that increases the enyzme's activity against some advanced antibiotics. "I would make a lot of changes to the enzyme simultaneously, and see which of those mutations would allow the cell to survive when challenged with an antibiotic," he said "If the enzyme was working, the cell would survive. If the mutations destroyed the enzyme's activity, the cell would die."

Lefurgy and colleagues from the Cleveland VA Medical Center, the University of Modena in Italy, and the Albert Einstein College of Medicine are currently studying another enzyme called FOX-4, which causes resistance to cefoxitin, a drug used widely in the 1980s for a variety of skin, bone, respiratory and urinary tract infections. "We think FOX-4 developed out of the overuse of cefoxitin," he explains. "We are studying how this enzyme is able to recognize the specific structure of cefoxitin as opposed to other types of antibiotics, such as penicillin."

What worries Lefurgy and his colleagues is how antibiotic resistance is affecting the medical world's arsenal of drugs. "The drugs we are most concerned about are called carbapenems – our drugs of last resort. Although new antibiotics are always being researched, once resistance has developed to the carbapenems we have very little left that is ready to go," he said. "The concern is that there are many similarities between cefoxitin and the carbapenems. Perhaps FOX-4 will evolve and develop broader resistance, including carbapenems. In the lab, a controlled environment, we are trying to determine what kinds of drugs could be developed to circumvent resistance enzymes."

Lefurgy says antibiotic resistance is a battle that goes beyond the laboratory. First step:  Only giving antibiotics to patients who need them.

"By that, I mean people who have bacterial infections. Many times physicians prescribe antibiotics to patients with viral infections," he said. "Sometimes it is a preventive measure so the patient does not get sicker. But in many cases it is prescribed for an infection or influenza that will clear up on its own, many times at the behest of the patient, not the doctor."

A more elusive culprit is the area of agriculture. Lefurgy explains: "Eighty percent of antibiotics that are currently given in this country are administered to well animals. Animals that are given antibiotics will grow faster and larger. It reduces outbreaks of disease among animals kept in confined conditions. This makes meat very cheap. Perhaps economically that's a good thing, but it creates antibiotic resistance in animals which then gets out into the environment.

"This is problematic in the United States, but even more so in Asia where antibiotic resistance rates have been measured to be much higher than they are here."

Steps – no matter how small they seem - are necessary, Lefurgy said.

"Wash your hands frequently," he said. "If you are prescribed antibiotics, take the full course to kill the bacteria so resistance doesn't have a chance to develop. Don't give half your bottle of medication to a sick relative or friend.

"We need to practice good public health," he said, "in as many places as we can."