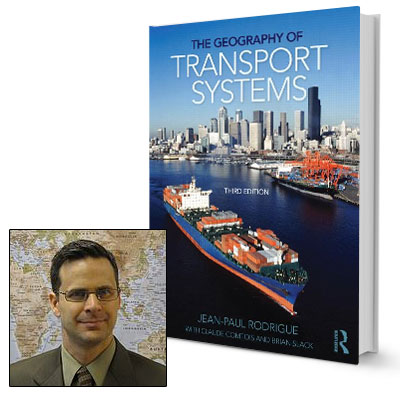 Jean-Paul Rodrigue, professor of Global Studies and Geography , has been on the Hofstra faculty since 1999 . His expertise is in transportation issues, energy prices, freight distribution logistics and supply chains – “pretty much anything that makes the global economy work,” he said.

His decision to focus on this area of research came as he was working on his PhD on transportation issues in China, which was then becoming a major global exporter and where many American companies were relocating.

Consumers are, for the most part, unaware of the technology, politics, and behind-the-scenes processes that ensure products are well stocked in the stores. “Advances in transportation technology are behind all the choices we have as consumers,” Dr. Rodrigue said. “The key is the container which can be filled with pretty much anything.” The container – which can transport everything from fruits and vegetables to televisions, lumber and grain – is the unsung hero of global trade.

The system of transporting goods overseas goes unnoticed unless something goes wrong, says Dr. Rodrigue. When asked about concerns over container security, Dr. Rodrigue feels that it’s an issue that has been somewhat overblown. “The security issue is an exaggerated topic … Business is fairly secure. We’re not dealing with unknown entities here. These are large suppliers, purchasers and manufacturers.”

In recent years, Dr. Rodrigue has been interviewed regularly on plans to expand the Panama Canal . People are interested in the “impact this would have on American trade.” He is also well versed in transportation efficiency , which may have stalled due to rising energy costs and issues of congestion in developing countries.

Dr. Rodrigue is the author of five books, 25 book chapters, more than 40 peer reviewed papers and numerous reports. He has delivered more than 130 conferences and seminar presentations, mostly at the international level. His book, L'Espace Economique Mondial: les Economies Avancees et la Mondialisation, about the global economic space, was published by Les Presses de l'Universté du Québec and won the 2001 PricewaterhouseCoopers award (Prix du livre d'affaire) for the best French business-related book published in North America. His high impact textbook, The Geography of Transport Systems, was first published by Routledge in July 2006 and is now in its third edition. He is also co-editor of 2013’s Sage Handbook of Transport Studies. In 2011, was appointed to by the World Economic Forum to its Global Agenda Council on Advanced Manufacturing.

Professor Rodrigue has recently been appointed to the 11-member Freight Advisory Board of The Brookings Institution in Washington, DC, which includes representatives from a wide range of industries: manufacturing, freight shipping, public agencies, private consulting, and academia. He has also been appointed to serve on the advisory board of the United States Merchant Marine Academy (USMMA) at Kings Point, NY, and has been tasked by the Inter-American Development Bank to provide regular contributions to their freight transport and logistics blog.

Dr. Jean-Paul Rodrigue in the news