The National Center for Suburban Studies at Hofstra University®

The single-family detached home and the residential mortgage occupy important places in the making and remaking of the U.S. suburbs. Several NCSS research projects have focused on the role of housing in the redevelopment process and the efforts to restore suburban communities in the aftermath of the foreclosure crisis.

Uniondale Vacant Property Tracking Project. The National Center for Suburban Studies at Hofstra University® is collaborating with the Uniondale Community Land Trust to develop the Uniondale Vacant Property Tracking Project, an initiative supported by a New York state legislative grant and the Celebration of Suburban Diversity Dinner. Ten years after the onset of the crisis, New York and Nassau County in particular continue to face high levels of vacancy. Many “zombie homes” remain entangled in a complex maze of ownership resulting from private-channel securitization practices that were common at the height of the subprime boom. The Uniondale Community Land Trust is a nonprofit that seeks to acquire these homes, renovate them, and resell the houses to homeowners while retaining the land to ensure permanent affordability. The Uniondale Community Land Trust pursues this goal in close collaboration with local civic groups, government, and its nonprofit partners.

The grant will enable NCSS Academic Director Christopher Niedt, PhD, author of Foreclosed America (Stanford University Press) to collaborate with the Uniondale Community Land Trust staff on the project. The team will use public and private databases, along with the GIS mapping expertise of Hofstra professors and students, to monitor the status of vacant properties within the Uniondale CDP. This will provide valuable empirical insight on the scope of the continuing crisis and facilitate the identification of properties that are best suited for development as owner-occupied affordable housing.

The Effects of the Suspended FHA Premium Cut on Long Island, New York (2017) – This working paper by Christopher Niedt, Academic Director of the NCSS, outlines the impact on homeowners of a January 2017 White House executive order suspending a scheduled cut in interest rates for FHA mortgages.

Accessory Dwelling Unit Study (2016) – This study, commissioned by the Long Island Community Foundation, provides a historical overview of ADU regulation on Long Island, a survey of existing town and village codes, a demographic profile of communities where ADUs are and are not permitted, a basic count of ADUs in the region, and data from a limited survey of local officials.

Our Homes, Our Newark: Foreclosures, Toxic Mortgages, and Blight in the City of Newark (2015) – This study, released by NCSS and New Jersey Communities United, examined the lingering effects of the subprime crisis in Newark, and finds that underwater Private Label Security (PLS) mortgages are contributing to blight. 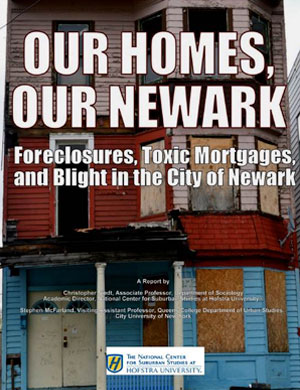 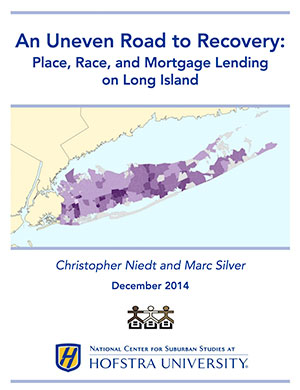 Mortgage Volume and Price on Long Island, 2005-2010: An Analysis of HMDA Data (2012) – Originally sponsored by Bethpage Federal Credit Union, this report, by Chris Niedt and Sandra Garren, provided a preliminary analysis of lending patterns on Long Island during the subprime bust.

Long Island Economic Development Council reports – NCSS has participated in a number of economic development projects for businesses, not-for-profits, and government agencies, with a focus on creating prosperity for all people and places.

New Cassel Revitalization Study – A multiphase study examining the various groups that came together to initiate the renewal of this Long Island hamlet as well as the outcomes and related perceptions that followed.

Forging a New Housing Policy: Opportunity in the Wake of Crisis (2011) – As the housing market unraveled during the subprime bust, the lack of any coherent policy response led the NCSS to co-organize a one-day conference on policy and organizing responses in November 2008. This conference – featuring academics, advocates, and community organizers from across the country – examined solutions to the crisis' root causes. In early 2011, we released a compilation of essays on the same theme.