Institute of Innovation and Entrepreneurship

The mission of Ascend Long Island is to support the economic development of underserved Nassau County communities by helping diverse entrepreneurs win contracts from larger companies and provide them with essential training and mentoring using the "3 M" model developed by the national Ascend network: Management, Money, and Markets.

Ascend Long Island is seeking applications for its second cohort, targeting businesses with revenues ranging from $100,000 - $1,000,000 and businesses that view other businesses are customers. The program is funded through JPMorgan Chase in partnership with the national Ascend program Ascend Cities. 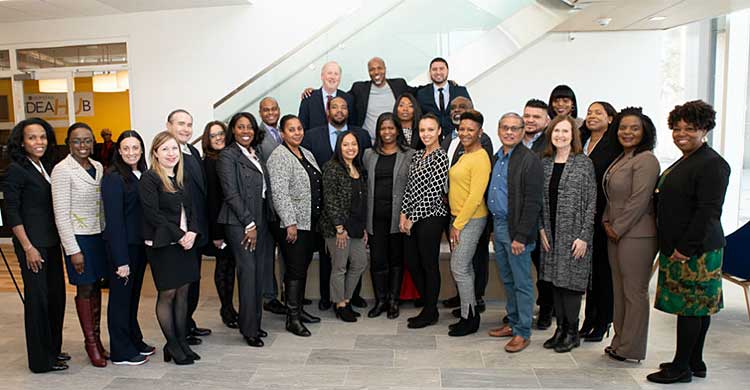 The geographic focus of the pilot 2019 cohort was a cluster of four communities – the villages of Hempstead and Freeport and hamlets of Uniondale and Roosevelt – known as "The Corridor." The 2019 cohort included 18 diverse businesses from a variety of industries ranging from cleaning to signage to health and wellness.

The 2019 cohort truly showed the diversity of business that Nassau County has to offer! In fact, over 50% of the businesses are women-owned! Also notable is that 50 % of the businesses reported an increase of at least 2% in their 2019 revenues!

Based on the program’s success, Ascend Long Island will seek to extend this ecosystem of support and its capacity-building benefits to diverse communities throughout Nassau County.

The 2020 cohort will continue to benefit from the services provided from Ascend Long Island, including connections to the Partners Advisory Council – major corporations and government agencies who support supplier diversity, as well as participation in workshops taught by Professors/BOC/Partners Advisory Council members over the course of nine weeks, mentorship and technical assistance, and the opportunity to present at our annual procurement conference.

Hofstra University considers the Ascend Long Island program one of the most important and impactful community programs in which it has had the privilege to participate.