Dr. Jingsi Christina Wu is an award-winning media studies scholar who is fascinated by the crossroads of entertainment media, politics, civic engagement, and culture. Published in some of the field’s most prestigious journals, her research has examined gender roles in video gaming, Facebook politics, the ‘Real Housewives’ reality television series, and China’s ‘Super Girl’ phenomenon.

“I view it as my mission to foster the kind of worldly curiosity that my students can take with them to any job they are given and a cosmopolitan worldview that enables them to better participate in conversations that move beyond specific professions or skill sets,” she says. “In addition to their ability to make things or write well, my hope is to nurture them into educated learners, engaged citizens, and open-minded social members.”

Dr. Wu joined Hofstra in 2012, and teaches courses on media literacy, global media and news systems, the history and development of mass media, and mass media, politics, and policy making in the Lawrence Herbert School of Communication.

"...as a teacher, I would say the most valuable part of a liberal arts education is to hone one's ability to learn and use that learning in constructive ways."

Most recently, she co-authored a new study that examines the strategic use of gender in video gaming, research that helps deepen our understanding of the intimate connection between our online and offline lives.  The study, which drew national media attention, is part of the larger, federally-funded, multidisciplinary Socio-Cultural Research in Bounded Environments (SCRIBE) project that she has participated in for nearly three years.

In 2013, the Association for Education in Journalism and Mass Communication, which sets national accreditation standards for colleges and universities, awarded Dr. Wu with an Emerging Scholar grant for her developing manuscript, Entertainment Media and Politics in Contemporary China.  The forthcoming book expands on research that won her the distinguished doctoral dissertation award in any field in the College of Arts and Sciences at the University at Albany, State University of New York, where she earned her Master of Arts in 2008 and PhD in 2011.

Growing up and studying in China, and later in the United States, has allowed her to examine two very different media systems – and the cultures that shape them -- firsthand. 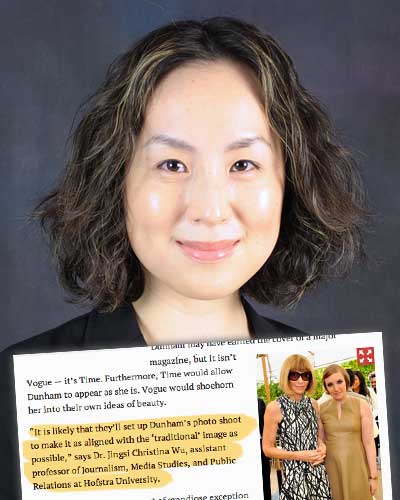 “Stepping away from my home country, where politics is a completely different beast and the media are highly controlled, I started to notice that people back in China do not often talk about entertainment just as entertainment.  They frequently reference their real-life experiences in making sense of the media, sometimes entering quite serious conversations about politics, work, relationships, and other important areas of their social life” she said. “For example, ‘Super Girl,’ the Chinese version of ‘American Idol,’ took China by storm in the mid-2000s.  One of the most obvious reasons people attributed to its success was the audience’s ability to vote on the show, when they do not get to vote for their public officials as ordinary citizens.”

“Over the years, I formed my academic identity around the exploration of how media, particularly entertainment, interacts with the political process, since it is often left out as irrelevant, if not harmful to serious politics,” she noted. “I also became more aware that this interaction is not unique to China or other less democratically developed environments.  Entertainment is of great value to any political environment, except that ‘American Idol’ may be talked about in quite different ways in America than ‘Super Girl’ is in China.”
It is this informed point of view that she brings into the classroom, where she has mentored students on their course projects, independent studies, and honors theses. “I tremendously enjoy sharing my research background and passions with my students; their eyes light up when I talk about results that directly came from my projects.”

The self-professed movie and television junkie (her current favorites include “Breaking Bad” and “Moonrise Kingdom”) has presented at academic conferences extensively across the United States and abroad, and been published in prestigious journals including Information, Communication & Society, Television & New Media, and The Communication Review.  At Hofstra, she serves on committees for interdisciplinary courses and the journalism MA capstone defenses, as well as for the Spring 2015 presidential conference on George W. Bush. She is also a faculty fellow at the Center for Cultural Sociology at Yale University.

She takes pride in nurturing a new generation of thinkers and not just doers:  “When I was an  undergraduate, I became extremely fascinated by the power of critical thinking and how that may inform our way of viewing the world and engaging in society.  Now as a teacher, I would say the most valuable part of a liberal arts education is to hone one's ability to learn and use that learning in constructive ways.”