The Student Government Association (SGA) is Hofstra University’s student-run governing body and is composed of full-time undergraduate students that act as a liaison between Hofstra students and the University’s faculty, administration, and Board of Trustees. SGA has three branches: the Senate, Cabinet, and Judicial Panel. In addition to serving as the primary representative for the interest of the student body on a University level, SGA plans and executes multiple programs and initiatives throughout the academic year and oversees the finances of over 180 clubs and organizations. Any undergraduate student who meets the minimum GPA requirement and is eligible to vote in SGA elections is eligible to join. The more passionate students we have working with us, the more we can do for Hofstra, so consider joining SGA during our next round of elections!

SGA is involved in addressing student concerns and the betterment of student life. Currently, SGA is split into two committee categories: Logistic and Advocacy. Logistic committees include Appropriations, Club Resources, Communications, and Programming. The Advocacy committees are Academic Affairs, Equity and Inclusion, Facilities and Operations, and Wellness and Campus Safety. All these committees work to advance the needs and interests of the student body, as well as support and assist clubs in their endeavors. With all that Hofstra offers, all you need is the motivation and desire to get involved. Let SGA help you find your home on campus. 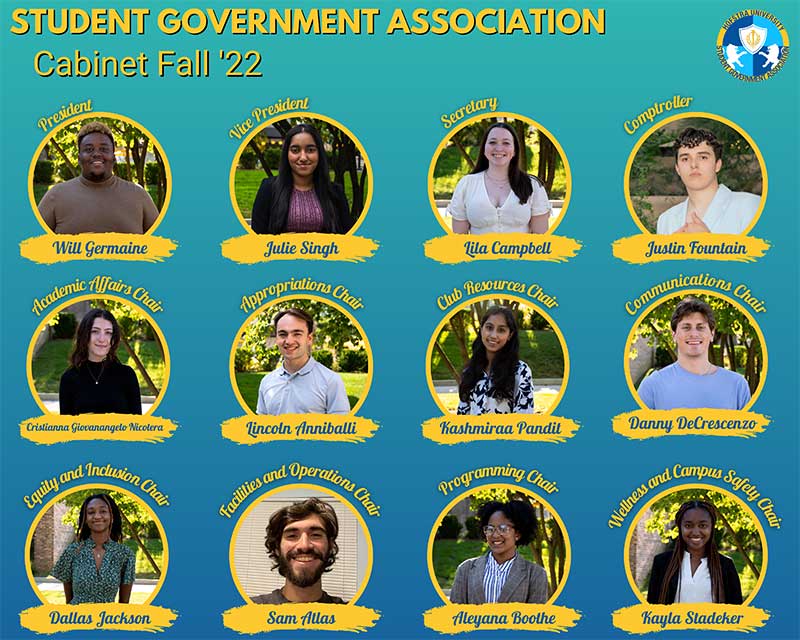 President Will Germaine is a senior from Brooklyn, NY, majoring in Community Health and double minoring in Chemistry and Civic Engagement while pursuing the HPHS Dual Degree in a Master of Health Administration. Vice President Julie Singh is a junior from Queens, NY majoring in Finance with a minor in Marketing.

Will and Julie are excited to be back on campus to meet and see the new and returning members of the Pride! They are planning on taking advantage of in-person programming and giving back to the Hofstra community through service as much as possible. As President and Vice President, Will and Julie have three main campaign points that make up their platform:

Will and Julie are looking forward to leading and being back with the Pride this year because Hofstra is always Better Together!

The Cabinet is the executive body of SGA. Cabinet members direct the activities of their committee to best benefit the student body. The Cabinet is composed of the Committee Chairs, along with the President, Vice President, Secretary, and Comptroller.

The Student Government Association (SGA) Judicial Panel is the highest judicial body within the Student Government Association at Hofstra University and is comprised of five full-time undergraduate students elected by the student body. The Judicial Panel has original jurisdiction with issues between SGA and its consistory, two or more SGA clubs, SGA and an SGA club, an SGA club and a student at Hofstra University, and Student Activities (enforcing an SGA policy) and an SGA club or a student at Hofstra University. In addition, the Judicial Panel has appellate jurisdiction with issues between the Sports Board and a sports club, the Inter-Fraternity/Sorority Council (IFSC) and Inter-Fraternity Council (IFC), Multicultural Fraternity and Sorority Council (MFSC), or the Panhellenic Association (PHC), and the Inter-Fraternity/Sorority Council (IFSC), and any fraternity or sorority.

The Senatorial branch is the highest legislative authority in the Student Government Association and has the authority to pass minutes and approve the actions of all standing committees, including allocation of funds. It further is the body that discusses and debates changes to SGA policies and approves resolutions to be passed up to various offices in the University. Senate meetings follow the rules of Parliamentary Procedure and are chaired by the SGA vice president.

The full-time undergraduate student body elects the Senate. Each senator represents one hundred fifty (150) of their fellow students. Senators serve on one of six standing committees. Each committee is chaired by a senator elected to do so by the full Senate. These chairs serve as both members of the Senate and as members of the Cabinet, the executive body of SGA, and direct the activities of their committee to best benefit the student body. Every committee reports directly to the full Senate.

Unless otherwise voted upon, the Senate must meet at least once per full week of classes during the academic year. Senators are obligated to attend both their committee meetings and Senate meetings, with attendance being monitored and managed by the Ethics and Conduct chair. At Senate meetings, pending legislation is discussed and voted on, clubs seeking to be recognized by the SGA are voted for approval, and each member of the Cabinet, including the president, vice president, and all of the committee chairs, has the opportunity to give a report on their committees' actions.

Senate meets Thursdays at 6 p.m. in the Student Center Greenhouse. Meetings are open to the public.

Want to make a change on campus?

Joining the Student Government Association can be a life-changing event. If you are looking for a way to get involved, SGA may be the place for you. SGA members are provided countless opportunities for networking, enhancing social skills, gaining professional experience, and advancing leadership skills. Hofstra’s Student Government Association hosts fall and spring elections for any full-time undergraduate student interested in serving the student body.

Missed the last election, but still want to be involved with SGA? Become an associate and help SGA help the student body. Associates are eligible to vote at committee meetings. If you're interested in becoming an associate, contact SGA_vicepresident@pride.hofstra.edu for more information.