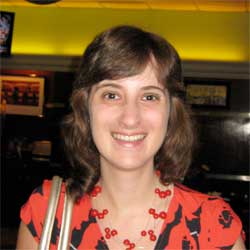 Carolyn Kurek is an associate production editor at Hachette Book Group in New York City. She graduated from Hofstra in 2005 with a BA from the School of Communication, having majored in print journalism and minored in American history and English. During her time at Hofstra, she was a part of Phi Beta Kappa, Phi Eta Sigma, and Golden Key honor societies, and is a member of the inaugural class of Hofstra University Honors College, and worked as a contributor and house copy editor for the School of Communication's Pulse Magazine.

Carolyn has been with Hachette since May 2006, when she started as the assistant to the executive managing editor. She works in the managing editorial department, where she now coordinates the copyediting and proofreading of books for her own stable of successful and well-known authors, including James Patterson, Florence Henderson, Eric Weiner, Bill White, Caroline Kennedy, Jim DeMint, Joyce Meyer, Alexis Ohanian, Michael Bolton, and Tommy Mottola. Her responsibilities also include, but are certainly not limited to, regularly liaising with authors and editors and managing schedules to ensure all deadlines are met. She handles more than 30 original titles a year, seeing them through from manuscript transmittal to finished book.

Some of her favorite projects have been The Pro Football Hall of Fame 50th Anniversary Book, a collection of photos of the numerous unique artifacts that can be found only at the Football Hall of Fame in Canton, Ohio; No Bake Makery, a cookbook full of easy no-bake desserts; and Adulting, a humorous guide for 20 and 30 somethings about how to be a successful grown-up. Carolyn also arranged for one of her authors, Sheril Kirshenbaum, who wrote The Science of Kissing, to come to Hofstra to give a lecture on Valentine’s Day several years ago.

When she is not at work and/or surrounded by books, Carolyn enjoys spending plenty of quality time with friends (many of whom are fellow Hofstra graduates) and family and watching sports — particularly her beloved Mets, Islanders, and (football) Giants.