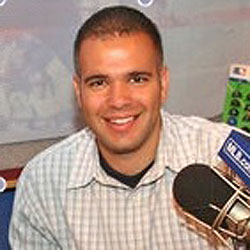 Vincent Micucci (B.A. '01) enjoys a career as a professional sportscaster that took root at Hofstra University. As an avid sports fan, it was evident from an early age that Vinny needed to spend his day around sports in some way. While at Hofstra, he worked with both WRHU and HTV Interactive. His fondest memories are at WRHU where he was sports director for nearly three years and broadcasted 100 games which, back in 2001, was a record. After graduation, Vinny did a short internship with MLB.com. His very first day of work was in November 2001. After touring the studios, he was offered tickets to Game 5 of the World Series that night. It turned out to be a memorable win for the Yankees after a dramatic home run by Scott Brosius. Shortly after, he began his work with MLB.com as an engineer. At the same time, Vinny worked during home games for the Long Island Ducks Baseball Club as the in-game on-field host, speaking in front of 7,000 fans every night. At MLB.com, he eventually was promoted to the position of on-air talent. Over the course of a decade, he called play-by-play commentary of Major League Baseball games on TV and radio. He interviewed many baseball legends and celebrities, including Derek Jeter, Jay-Z and Robert Redford. He hosted daily radio shows (with former players as co-hosts), and was fortunate enough to travel to cover numerous World Series games, All-Star events, spring training and exhibition games in Japan.

In 2010, Vinny started his own company in order to teach aspiring students how to speak in public as well as to become sportscasters. His new website, Sportscaster101.com, has many features where students can elect either to train at his East Meadow studios or download online classes to perfect their craft. In addition to the website, Vinny discusses his many opinions and debated topics online at Sportscaster101.tumblr.com. In early 2011, he published his first book, From Sports Fan to Sportscaster. The book chronicles what it's like for an everyday sports fan to climb the ranks and be on the field and in the mix as a sportscaster. It's written with a relaxed tone, while giving first-hand accounts of covering sporting events. Vinny enjoys play-by-play and hosting radio shows, and continues to do so while teaching students on Long Island. He lives minutes away from Hofstra University with his wife, Kara.