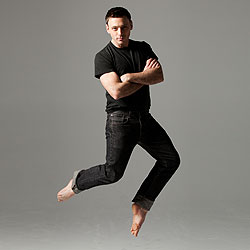 Larry Keigwin (B.A. ’07) founded KEIGWIN + COMPANY (K+C) in 2003 and, as artistic director, he has lead the company through performances at theaters and dance festivals throughout New York City and across the country. In addition to his work with K+C, recent commissions include Works & Process at the Guggenheim, The Juilliard School, The New York City Ballet's Choreographic Institute, and the Martha Graham Dance Company, among many others.

In 2010, Mr. Keigwin was named the Vail International Dance Festival’s first artist in-residence, during which time he created and premiered a new work with four of the ballet’s most prominent stars. Also in 2010, he staged the opening event of Fashion Week “Fashion’s Night Out: The Show” which was produced by Vogue and featured more than 150 of the industry’s top models. In 2011, Keigwin choreographed the new musical Tales of the City, at the American Conservatory Theater in San Francisco, as well as the new off-Broadway production of RENT, now running at New World Stages. In February 2012, he was commissioned to create a new ballet for the Royal Ballet of New Zealand.

Mr.Keigwin’s other choreographic credits include work with the pop band Fischerspooner and comedian Murray Hill, and serving as an associate choreographer for both The Radio City Rockettes and the off-Broadway musical The Wild Party. He has also created Keigwin Kabaret, a fusion of modern dance, vaudeville, and burlesque presented by the Public Theater at Joe's Pub and by Symphony Space. He is a co-founder of the Green Box Arts Festival in Green Mountain Falls, Colorado, a multi-disciplinary festival designed to increase cultural opportunities in the region as well as provide creative residencies to young, emerging choreographers.