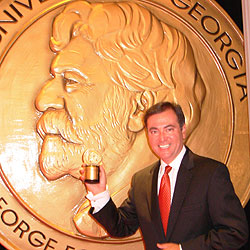 Alan Cohn (B.A. ’85) is a reporter for the I-Team at ABC Action News in Tampa, Florida. A longtime believer that "there's a lot more to reporting than showing up at the story," Alan received the 2007 George Foster Peabody Award, one of journalism's highest honors, for uncovering that defective parts were being installed on Black Hawk helicopters built by Stratford-based Sikorsky Aircraft. He also was honored with the regional Edward R. Murrow Award for Outstanding Investigative Reporting.

While at WTNH in Connecticut, Alan uncovered that employees of the Department of Motor Vehicles were illegally selling drivers licenses to illegal aliens, setting off a statewide scandal that led to arrests and changes in the way Connecticut motorists obtain driver’s licenses. Alan also uncovered major gaps in security onboard Metro North, the largest commuter rail system in the United States.

Alan previously worked at the NBC News Channel Network where he was a freelance correspondent covering stories and live shots for NBC owned and operated stations and NBC affiliates across the nation. He was also an investigative and Emmy Award-winning reporter and fill-in anchor at USA Broadcasting's flagship television station (WAMI).  His reports helped win back benefits for a Vietnam veteran, expose fraudulent police charity, and expose allegations of physical abuse at a drug treatment center.

Alan has also worked for New England Cable News, where he received an Emmy Award for uncovering the story of a convicted killer attempting to become a Boston police officer.

He began his career as an assistant producer at CBS News in New York, and later worked at WTIC-TV in Hartford and WBBG-TV in Springfield, MA. He and his wife, Patricia, have two children, Ann and Aaron.