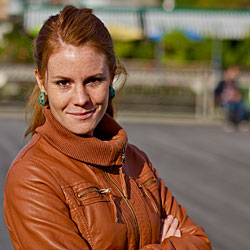 Janne Louise Andersen (M.A. ’12) is a Danish journalist who freelances and travels around the world for Danish, American and Arab print and online media. Visit Janne's blog.

Janne’s experience in print and digital journalism began before moving to New York, when she lived in Copenhagen and edited the Danish section of Akhbar al-Danmark, a bilingual Arabic-Danish newspaper published by The Arabic Media House in Denmark. Its extensive coverage of Arab communities in Denmark bolstered her local reporting experience and her knowledge about minority issues in Denmark, while also spurring a passion for reporting on Arab society and minorities elsewhere.

From 2007 to 2009, prior to entering the field of journalism, she lived in Israel and the Palestinian Territories, where she studied Arabic and cultural anthropology, interned at the Danish Diplomatic Mission and managed a project that supported local hip-hop artists.
This experience has since led Janne to cover the Arabic hip-hop scene extensively. It also has led to a focus on work about the intersection of culture and politics. She has had several articles published in Rolling Stone Middle East, The National, and various Danish media such as Gaffa, Opinionen, Weekendavisen,  and Politiken.

Janne holds a bachelor’s degree in cultural anthropology from Copenhagen University, Denmark, and a Master of Arts degree in multimedia journalism from Hofstra . Her content management systems experience stems primarily from her work as an assistant production editor at Longislandreport.org, a local Long Island news site, and as a reporter and member of the editorial board at korrespondenterne.dk, a Danish news site focused on foreign affairs. Most recently, she worked at the weekly newspaper Queens Chronicle, covering the borough with articles for the newspaper and multimedia content for qchron.com and has become a regular contributor for the culture section of the online Mideast news site Al Monitor.