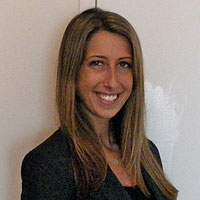 Alexa Silverman '08 grew up in Merrick, New York, and, as a transfer student, never could have imagined how involved she would become with the Hofstra community or how much she would benefit from it.

While at Hofstra, Alexa was active in Alpha Epsilon Phi, The Chronicle, WRHU-88.7FM, and the Pride Guide program. After graduation, she worked as the account associate on a team of 10 people at Publicis Consultants PR.

In summer 2009, along with a close friend and fellow Long Island resident, Alexa created and founded a 501(c3) nonprofit organization, NY Fresh Connections, whose mission is to engage young adults in meaningful service through leadership, professional development, and hands-on events. Their organization hopes to empower young adults with the opportunity to develop a connection with their community through personal, community, and professional connections. Fresh Connections has worked with The Red Bull Space, mizuNYC, and Catherine Malandrino as a branding mechanism to create events that motivate young professionals to "Get Up & Give Back!" Their work has benefitted the Stephen Siller Children's Foundation, AFYA, Habitat for Humanity, and God's Love We Deliver, among many others.