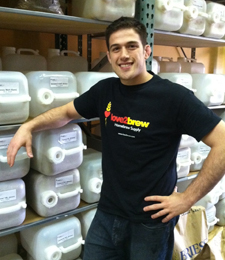 Ron Witkowski's (B.B.A. ’06) passion for beer began to blossom while he was obtaining his Bachelor of Business Administration. As with many college students, his passion revolved around expanding his palate and consuming beer, but the seed had been planted.

After graduation, he was one of eight students accepted into the Management Training Program offered by Broadridge (then ADP). He left sales to take an operations management job with Broadridge for  two years.  He learned a valuable lesson working for Broadridge; the 9-5 corporate job is not for everyone, and it certainly was not for him.

Mr. Witkowski then returned to a sales role with Bematech as a partner program manager and, within three years, he was promoted to a territory manager, business development manager and, finally, to vice president of North American sales. It was during his three years at Bematech that he began his journey into beer brewing. What started as a casual hobby soon became a fervent passion. Initially introduced to the process of brewing by his friend and now love2brew partner Mark Spezio (who happens to be his roommate from his first year at Hofstra), he took the hobby and ran with it.

After identifying several weaknesses in the home brewing industry, Mr. Witkowski decided there was a great opportunity for a large-scale home brew supply distribution company on the East Coast, and just like that, love2brew was born. Today love2brew is one of the fastest growing homebrewing supply companies in the United States.  Love2brew provides a plethora of products combined with daily website content about beer brewing (which, prior to love2brew, was non-existent). Located in central New Jersey, love2brew is an active member of the home brewing community, sponsoring local clubs and events designed to help foster and grow the hobby.

Aside from brewing great beers, Ron Witkowski is a black belt in Brazilian Jiu-jitsu who enjoys training and hiking with his dog Umbra.