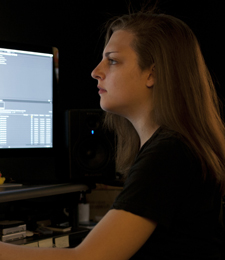 Brittany DeLillo (B.A. ’10) picked up a pencil, started drawing, and developed her passion for art through most of her young life. Film never came into the picture until her junior year in high school. After watching Breakfast at Tiffany’s something clicked, and a fire was ignited inside her. Her mind was opened up to the glory of filmmaking as an art form rather than as a source of entertainment. This spurred the decision to attend college for a film degree. Brittany excelled at Hofstra, achieving a 3.97 GPA and attaining high honors, including the Max Kolb Scholarship.

Four years in New York taught Brittany the theory behind filmmaking – how to do it from pre-production to locking the final cut. The rigorous production classes helped her discover her passion for the area of post-production, specifically editorial. After graduating in 2010, she pursued a career as an editor in both New York and Boston. With little to no luck, she applied to various retail jobs and eventually landed a position at the flagship Apple Store in Boston. While working there didn’t seem like it would further her film career, in hindsight it gave Brittany the opportunity of a lifetime. One morning while working, a gentleman named Alan Pafenbach, a legend in the advertising industry, walked in looking for a set of headphones and left with a candidate for an editor position at the up-and-coming digital agency SapientNitro (recently named the #1 digital agency in America). After a few rounds of interviews, they hired Brittany. Since then she’s worked with a range of clients, including Chrysler, RAM Trucks, Dodge, Fidelity, Bertucci’s, Lenscrafters, and Dunkin Donuts. She also has done freelance projects for New Balance and The Boston Beer Company.

While the advertising industry is fun and rewarding, Brittany’s true goal is to edit feature-length motion pictures. The Oscar for Best Motion Picture Editing is the bar she has set for herself. “I know I’ll win; it’s just a matter of when.”