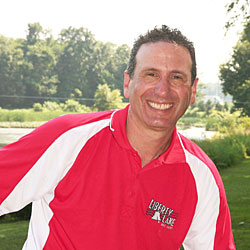 Andy Pritikin grew up in Caldwell, NJ as a high school athlete and musician for his school. At 17, Andy joined an accomplished local rock band, and began performing throughout the NY/NJ areas, culminating with an appearance on Star Search with his Long Island–based band, Absolut Drama, who performed at Hofstra numerous times in the mid-1990s. Andy majored in music merchandising at Hofstra. He stayed for a fifth year of school and obtained a MS in Education, and embarked on a relatively short but impactful teaching career as a band director in Wall Township and South Orange, NJ. Working at camp during the summers, Andy was offered a full-time job working for the most successful camp entrepreneur at that time, Ben Appelbaum. Thus began his 20-year career as a camp professional, which now includes the title of president of the American Camp Association, NY/NJ.

Andy is the owner/operator/founder of Liberty Lake Day Camp, in Bordentown, NJ – one of the largest summer day camps in NJ, and a founding partner at Everwood Day Camp, in Sharon, MA. Andy has served as a board member of the American Camp Association, NY/NJ and chair of the Tri-State Camp Conference (the largest gathering of camp professionals in the world), and for the past decade as the professional development oversight chair. Andy has been an active member of numerous ACA committees including the "Heal the Children" program planning team, which provided camp scholarships to children of families greatly affected by Hurricane Sandy. Andy is also known in the industry for facilitating cutting-edge workshops for both regional and national summer camp conferences. He is an active supporter of Morry's Camp and SCOPE, two non-profit organizations that raise money to send underprivileged youths to camp each summer, and in 2012 created the Liberty Lake Foundation to do the same for children in the areas local to Liberty Lake. Andy is also the founder, former president and current board member of the New Jersey Camps Government Affairs Project, an organization created to protect the interests of all New Jersey summer camps. Andy consulted with two successful camps for the Foundation of Jewish Camps "Incubator" program, is a board member of his local Chamber of Commerce and is active with his local Watershed Association. This past June, New Jersey Leukemia and Lymphoma Society named Andy "2013 Man of the Year" for helping to raise $250,000 for blood cancer research in tribute to his son's recent diagnosis and recovery.

Andy has two beautiful children and a wonderful wife, Jill. Andy believes that busy people get things done, and still finds the time to enjoy music, sports, and working out. He stays in touch with many of his Hofstra Netherlands "suitemates," and still wishes he was half as cool as his former mentors and piano teachers, Dr. Dave Lalama and Mortin Estrin.