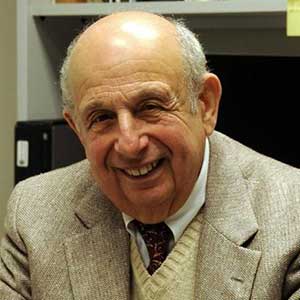 Guy (Günther) Stern was born in 1922 in Hildesheim, Germany. He immigrated to the United States in 1937. From 1940 to 1942, he studied at Saint Louis University, followed by three years of Army service. As a sergeant in the U.S. Military Intelligence Corps, he took part in the Normandy invasion and was decorated with the Bronze Star. In 1948, he earned a BA at Hofstra University and an MA (1950) and PhD (1954) at Columbia University. His teaching career included Denison, Columbia, and the universities of Cincinnati, Maryland and Wayne State (Detroit, MI), the latter as Distinguished Professor for German Literature and Cultural History. He served as guest professor at several German universities and authored/edited numerous books and anthologies about German literary history, focusing on exile and immigrant literature. After retiring, he became director of the International Institute of the Righteous at the Holocaust Memorial Center in Greater Detroit.

Stern is co-founder of the Lessing Society, board member of the Kurt Weill Foundation, and president of the PEN Centre of German-Speaking Writers Abroad.

Stern’s selected honors include Grand Order of Merit of the Federal Republic of Germany (1987), Honorary Citizen of Tucson, AZ (2007) and Hildesheim/Germany (2012), honorary doctorates from Hofstra University and Hildesheim University, and National Order of the Legion of Honor from the French Republic. He lives in Greater Detroit with his wife, Susanna Piontek, a German writer.