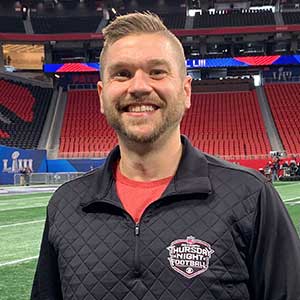 William Blakely graduated from Hofstra University in 2009, earning a Bachelor of Arts in Video & Television with a Minor in Speech Rhetoric.  Currently, William is a live sports video editor, based out of the New York City television production market.

William’s career started during the spring semester of his senior year, when an older fraternity brother helped him secure an entry-level job with CNBC.  Though financial television wasn’t William’s passion, the position provided great exposure to the industry and gave him the ability to explore the field. Once his foot was in the door, opportunities began to present themselves to William. In 2010, he took a position on Good Morning America, where he learned to operate the EVS machine – a globally recognized leader in live video technology for broadcast and new media productions. It was this opportunity that proved to be the catalyst in William’s career. As his skills sharpened and his career continued to flourish, William was approached to work a track and field event in Boston – his first-ever remote job. While he had never worked on the sports field of television, having been involved in sports in high school and still being an avid fan made the chance to cover live sports a natural fit for William.

After freelancing in the local New York sports market for a bit and making a name for himself as an EVS operator, William began to receive job requests for network sports television events. And in 2013, William jumped on the opportunity to fill in on SEC Football for CBS Sports. This gig was the big break William needed to be recognized for his live editing skills, and in turn, created numerous opportunities within the sports production world for him.

Since the start of his career, William has worked on some of the biggest sporting events in the industry. From Super Bowls to the Olympics, to golf majors and horse racing’s Triple Crown, William travels extensively, working to provide the highest level of television coverage, with the highest level of production crews.

When William is not at work, he enjoys traveling with his wife, Jasmine, spending time with his dogs, running, and golfing. In 2018, William ran the NYC Marathon with Fred’s Team of Memorial Sloan Kettering Cancer Center, to raise money for cancer treatment. William is determined to run another marathon to help with the charity.