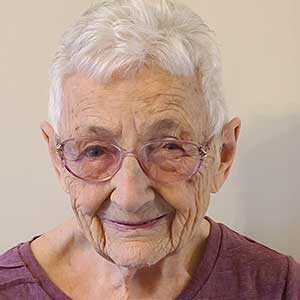 Mary Jeanne Hurley Hickey is a pioneer. Choosing physics as her major at Hofstra, as well as math, was very unusual for a woman in the 1940s. In fact, she was one of only two women to earn a BA in Physics in 1950. At Hofstra, she was a member of Sigma Pi Sigma and Kappa Mu Epsilon, the physics and math honor societies.

After graduation, disregarding career advice to become an executive secretary, Mary Jeanne went to work for Grumman Aircraft in Bethpage, as a mathematical assistant in the Applied Loads Group of the Engineering Department. Grumman was a major manufacturer of planes for the U.S. Navy: fighters capable of landing on aircraft carriers, amphibians used for search and rescue, and planes for submarine surveillance, among them. Grumman planes were the first Blue Angels. (The company merged with Northrop Aerospace to become Northrop Grumman, based in Falls Church, Virginia.) Taking advantage of an in-house class in FORTRAN, a new programming language for scientific computing, Mary Jeanne became the principal programmer for her group. Courses at Brooklyn Polytechnic Institute under Grumman’s educational program helped her advance to applied loads engineer in 1954. Transferring those courses to Hofstra, she went on to earn an MA in Physics in 1955.

After 10 years at Grumman, Mary Jeanne married and moved to Massachusetts, becoming the mother of one daughter and five sons. Community involvement included Camp Fire Girls leader and camping trainer, elected Town Meeting member for many years, delegate to the 1980 White House Conference on Families, and certified instructor in Natural Family Planning. She and her husband hosted international students and other visitors from many different countries, for both short and long stays.

In 1964, Mary Jeanne became an accredited leader/breastfeeding counselor for La Leche League International. After several local positions (group leader, chapter leader, newsletter editor), she progressed to administrator of Massachusetts; administrator of Rhode Island; administrator of Maryland, Delaware, and D.C.; and liaison with Canada, French Canada, Great Britain, Germany, Switzerland, and New Zealand. In 1980, she passed the first exam given, and became an international board-certified lactation consultant. Later, she administered this exam for several years. In 1990, Mary Jeanne took a position with Professional Credential Services in Nashville, Tennessee, as Massachusetts administrator and chief proctor of many paper and pencil, semi-annual professional exams, including Architecture, Engineering, and Nursing. In 1995, she and her husband became managers of the Sylvan/Prometric Testing Center in Boston. Here, exams were given on computers, both professional exams such as Nursing, Medical, and Dental, as well as the GRE and TOEFL.

In 2012, Mary Jeanne retired and moved to an independent living, 55+ community where she is a member of the finance committee. A lifetime member of the Association of Naval Aviation, she is a member and active participant with the Patriot Squadron Museum at the former Naval Air Base in South Weymouth, MA.