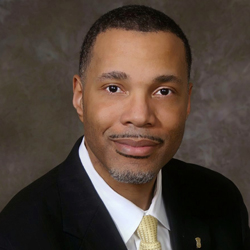 Reverend Darren M. Morton (B.B.A. ’89) is a man of many talents, specifically in the areas of social action, urban ministry, college administration, student development, and leadership. He constantly works to strengthen families and enhance the lives of young people of all races and nationalities. He is heavily involved in civic and social endeavors specifically affecting youth and the underprivileged of all ages. Rev. Morton is the seventh pastor and religious leader of the Macedonia Baptist Church in Mount Vernon, New York, where he received his conversion and baptism. His love of God brought him to the pulpit in 1994, under the tutelage of the great Reverend Dr. Richard H. Dixon, Jr., and was ordained in 1997. In 2009, during a transition period for his home church, he accepted the request to serve as interim pastor while he also continued to serve with the Vacation Bible School and other church programs as needed. Previously he served as an associate minister and youth minister for 15 years, assistant Sunday school superintendent and executive director of the Macedonia Baptist Church Mentoring Program.

For decades, Rev. Morton has focused his community efforts on the interplay between faith and education. To that end, he currently serves as the commissioner of Recreation for the City of Mount Vernon, NY, and has held several administrative positions at Hofstra University and St. John's University in a variety of student development areas, including college admissions, new student orientation, residential life, student activities, academic tutorial services, multicultural affairs, leadership development, and student development. Most recently, he served as the associate vice president for student affairs and director of the Vincentian Institute for Social Action (VISA) at St. John's University in Queens, NY. In addition to his many community efforts, he is a doctoral student at St. John Fisher College and an adjunct instructor for the School of Education at St. John's University. As a civic leader, he serves the community as chairman of the Education Committee for the United Black Clergy Big Brothers, chairman of Big Sisters of Brooklyn & Queens Advisory Board, member of Mount Vernon Branch NAACP, advisor to the St. John's College Chapter of NAACP, past master of Progressive Lodge #64, and former president of the Third Masonic District, Prince Hall Affiliated, Free and Accepted Masons.

He is a member of Alpha Phi Alpha Fraternity, Inc., the oldest black Greek-lettered Intercollegiate Organization, where he has maintained active membership since 1987, holding numerous leadership and committee appointments, including 24th Eastern Region vice president/ national board member (2001-2005), NY District director, Eastern Region executive director, and most recent chairman of National Intake Taskforce. Additionally, he serves as the chairman and CEO of the William Ross Education Foundation, the 501c3 organization for the Eastern Region of Alpha Phi Alpha and chairman of the Wesley Parrott Youth Programs, St. Albans, NY.

Rev. Morton is a graduate of Hofstra and St. John's Universities, where he earned Bachelor of Business Administration and Master of Education degrees, respectively. He is a graduate of Tabernacle Bible Institute and Manhattan Bible Institute and has taken graduate theology courses at St. John's University. He was a founding member of Hofstra’s Black/Hispanic Alumni Association. He travels the nation with a message that the appropriate education, adequate social development and unique leadership skills serve as a springboard for success.