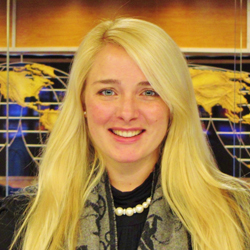 Shannon Bennett (B.A. ’09) is a young, up-and-coming broadcast journalist who has accomplished more than many others her age. Recently transitioning from radio to television, she has taken on the position of program information coordinator for CBS in New York City. In this position, she is responsible for maintaining a plethora of support information for CBS News and Entertainment broadcasts, including data related to production companies, contacts for newsmakers, and follow-up consumer-related information as broadcasted by CBS News.

Prior to graduating in 2008 with a degree in broadcast journalism and minor in political science, Shannon was a sports reporter for WRHU 88.7, Radio Hofstra University. She became the first female to co-host The Locker Room, a sports talk show on Sunday evenings. For Hofstra TV, she appeared on Midday Mania previewing the basketball season, and was a co-host for two seasons on For Your Island. Shannon made time for everything at Hofstra, from studying abroad in Venice, Italy, in 2006, to attending the primary in New Hampshire in January 2008. Furthermore she was involved in Greek life, serving as director of philanthropy for Alpha Phi. Shannon attributes her successful career after Hofstra to the internships she had as a student.

Starting as an intern for the Senior PGA Tour’s Commerce Bank Championship in Long Island, Shannon eventually held the title of media director for this tournament. Later that year, she interned for the Philadelphia Eagles, travelling to the city of brotherly love for home games to coordinate records set by players for the Eagles Television Network. From there, she worked with numerous Hofstra alumni as a sideline reporter for Verizon FIOS 1, and for MSG Varsity as a color commentator for high school basketball games and a sideline reporter for football games.

After graduating Hofstra, Shannon left Long Island for Manhattan and switched from sports to news as a World News desk associate for CBS Radio News. Initially, Shannon worked around the clock to fulfill the needs of a breaking news environment, in addition to taking on freelance projects for sporting events. After two years as a desk associate, Shannon became the TV liaison for CBS Radio News, arranging debriefs with TV correspondents, monitoring live feeds of news events and maintaining contact with foreign/national desks to monitor worldwide news coverage.