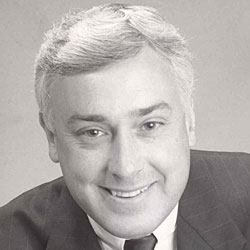 Dr. Franklin C. Ashby (B.A. ’76) is a leading authority on corporate cultures and the building of high-performance organizations as well as the author of four books on management and organizational strategy. Currently the CEO of The Leadership Capital Group LLC in New York, Dr. Ashby was previously executive vice president of Manchester Partners International and president of Manchester Training. He also served as president of one of America's largest IT training companies, and as vice president of instruction and chief learning officer at Dale Carnegie & Associates, Inc.

Dr. Ashby’s book Embracing Excellence, was voted one of the 30 best business books of the year by Soundview Executive Book Summaries and BusinessBookReview.com in 2002. His other books include Revitalize Your Corporate Culture, Developing Effective Leadership Programs, and the upcoming The Exponential Effect.

Dr. Ashby is a former member of the Commission on Educational Credit and Credentials at the American Council on Education in Washington, D.C., and a former chairman of the Business Advisory Board at ACE-CREDIT. An authority on education reform, he has participated in briefings for former President Bill Clinton and various members of Congress over the years, helped craft new legislation for members of the U.S. House Committee on Education and Workforce, and been listed twice among “wish list” candidates for Congress by a top Long Island business association.

In 2010 Dr. Ashby founded Ashby Learning Systems, a group of volunteer business book authors, Fortune 500 human resources executives, and college admissions officials dedicated to putting a world-class college and career readiness process within the financial reach of every teenager and secondary school in America. His editorial, “An Affordable School Reform That Works,” appeared recently in the Richmond Times-Dispatch.

A seasoned business analyst and corporate spokesperson, Dr. Ashby is a former host of the award-winning radio talk show Career Clinic. He has appeared on Good Morning America, Today in Japan, MSNBC’s Edgewise, The London Evening News, It's Your Money, The Fox Report and several other news programs. Stories about his work and books have appeared in The New York Times, The Washington Post, USA Today and other publications.  Dr. Ashby served as a guest analyst for MSNBC during the first Clinton-Dole debate, and continues to serve as a presentations advisor to political candidates in Texas and New York. A popular speaker and guest lecturer, his topics include business strategy, organizational turnarounds, the revitalizing of organizational cultures and education reform.

A former deputy U.S. marshal and acting president of the Long Island Chapter of the Columbia University Alumni Association, Dr. Ashby served three years as a career counselor for members of the New York Jets. He received a tryout with the New York Mets (outfielder) following his senior year at Hofstra.

A graduate and former guest lecturer at the Summer Institute in Management Systems at the Columbia Business School, he currently serves as a dissertation advisor to doctoral students at the University of Southern Mississippi. Dr. Ashby holds a B.A. from Hofstra University, an M.A. from Columbia University, an M.B.A. from The New York Institute of Technology, and a Ph.D. from The American University, UK.

He and his wife, Rita, and their son, Danny, live on Long Island. More information about Dr. Ashby’s background can be found at www.ashbysgreatexpectations.com and in recent editions of Marquis’ Who's Who in America and Who's Who in the World.