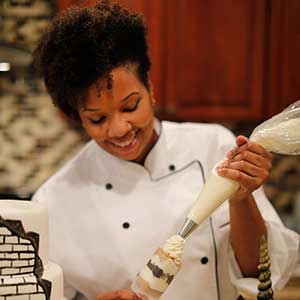 Shana Lawson was born and raised in Brooklyn, NY by her mother, a Brooklyn native, and her father, a Guyana native. The oldest of three children, Shana was raised in a large, close-knit household that extended beyond her nuclear family and included her grandmother as an active matriarch. As a child, Shana and her siblings were exposed to the arts by way of arts and crafts and formal dance lessons. She also learned to bake, which – by age 14 – became her Sunday dinner responsibility. Shana attended St. John's Prep HS, where she further cultivated her interest in the arts by taking her first fine arts classes. As her passion for the arts continued to grow, she chose art for every elective available during her high school career.

Shana began her studies at Hofstra University in 2002 with a major in fine arts education. During her time at Hofstra, she took a ceramics class under the supervision of Professor Paul Chaleff and became fond of the craft. A week before graduating with a BS in fine arts education with a concentration in ceramics, Shana was offered a position as a high school art teacher in the NYC Department of Education. During this time, she continued to be the family baker but found herself experimenting with her Sunday cakes using fondant. Her first cakes were not aesthetically pleasing, but for her daughter's third birthday, Shana created a treasure chest cake, and guests applauded her creativity.

After many books and much practice, Shana began selling her cakes in 2010 via referrals and went on to obtain an MBA to gain the business acumen necessary to grow her company. In 2014 she took a leap of faith and left teaching to focus on cultivating her dream of owning a bakery. After three years of selling cakes on her own, P.O.P. Cake Shop opened in Dekalb Market Hall in Brooklyn, NY. Shana has had the opportunity to work with We TV, Doll 10 Beauty, Marjani Beauty, BRIC Arts Media, It's RichGirlz, Members Club Clothing, Tiny Harris, Demetria McKinney, The Other Festival, Carissa Rosario and James Anderson, Free Arts NYC, Jenell B. Stewart, and others. She hopes to have the opportunity to share her one-of-a-kind push pops and custom-designed cakes with the world.