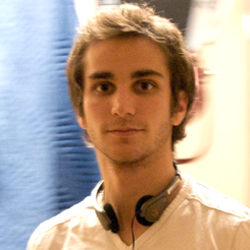 Adrian Saba (B.A. ’10) founded the company Flamingo Films in February 2011 to start producing his own films. His first film, El Limpiador (The Cleaner), had its world premiere at the San Sebastian International Film Festival, where it won the Jury's Special Mention. Since then, the film has been shown at festivals around the world. His next film, currently in development, was part of the official selection for screenplays at the 2011 La Habana Film Festival. It was also part of BoliviaLab 2012 and Cinefilia Executive Production Course 2012 with a full scholarship from Ibermedia.

Most recently, Adrian was accepted into the Cinefondation Residence Program from the Cannes Film Festival. They invite only six filmmakers from all over the world to live in Paris, all expenses paid, so that they can develop their next screenplay under the umbrella of the Cannes Cinefondation. The duration of the residence is four and half months, beginning March 1, 2013

Adrian was born in Madrid and was raised by the two contrasting worlds of his Peruvian father and Dutch mother, both of whom were involved in theater. At the age of 5, he moved to Peru, where he grew up surrounded by the world of the arts.

He completed his Hofstra studies in May 2010 with his senior film, The River, which screened at various film festivals worldwide and won Best Director at FilmoCorto (Perú), Best Short Film at FENACO (Perú), and Martil Film Festival (Morocco) where he was also invited to be a jury member for the documentaries in competition the following year.