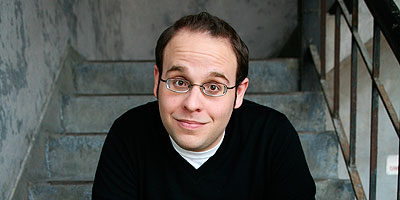 The title of Long Island's "official greeter" belongs to a Hofstra graduate.

Paul DeGrocco '06 worked as the weekend DJ at WNYG 1440AM and landed an audition with the Long Island Ducks baseball club, becoming the on-field promotions host, a position he has held for the last eight seasons. At the Ducks, Paul hosts promotions to sold-out crowds of more than 6,000 people every night.

After graduating from Hofstra with a B.A. in audio/radio communications, Paul went on to work for TMO Radio, as a DJ on WLIR 107.1 overnight and later on the morning show. During this time, he also held positions in the Ducks organization, including community relations manager and promotions manager. In 2007, while acting in numerous community and regional theaters, Paul was voted Long Island's "official greeter" by Newsday readers for his work with the Ducks. It was during this time that Paul left his full-time responsibilities in baseball to pursue a career in theater marketing at the new John W. Engeman Theater in Northport, Long Island's only year-round professional theater company.

Paul joined the theater in its infancy and has worked to brand, market, and build a public relations structure that has helped the theater become recognized and critically acclaimed by Newsday, The New York Times, The Daily News, News 12, TV 10/55, and other news and entertainment outlets.

In 2009 Paul decided to return his career focus to acting/hosting, his true passion. In November 2009 he became a guest performer in the off-Broadway improv comedy revue LMAO, and continues to perform regularly with the company.

Paul recently received national press coverage after being chosen as a finalist in the TeleBrands search for the next "As Seen on TV" infomercial host. Paul resides in West Babylon, New York.