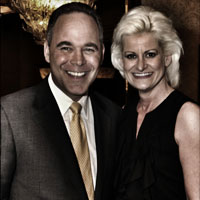 Jaci Clement earned her first byline in a daily newspaper when she was in the fourth grade. She's been working for and with media ever since.

Today, Jaci is executive director of the Fair Media Council, a New York metropolitan area not-for-profit media watch organization that educates and advocates for quality local news coverage as vital to maintaining the community's quality of life. In this role, she speaks frequently throughout the United States to business, community, and student organizations about media issues and also writes extensively on the topic.

Having worked on both the editorial and business side of the newspaper industry for Times Mirror Co. and Minneapolis-based Dolan Media, her media expertise is well-recognized. In 2007 she was an invited participant in a project to shape the newsroom of the future sponsored by the Media Giraffe Project, a research initiative housed within the University of Massachusetts Amherst journalism program. Her interest and beliefs in net neutrality and the need for a strong national broadband program led her to participate in the Broadband Technology Opportunities Program, to support the Obama administration's U.S. initiative to create a comprehensive broadband infrastructure. Her association with PENCIL enabled her to work with fourth- and fifth-grade teachers at PS 24 in Flushing, Queens, to introduce students to concepts of news literacy as necessary to the development of critical thinking skills and, ultimately, as the key to creating world-class citizens.

She holds the title of executive communicator, the highest rank of distinction bestowed by the Association of Women in Communications. In 2005 Jaci received the Distinguished Service Award from the Advancement for Commerce, Industry and Technology (ACIT). The Long Island Association has presented her with its Media Advocate of the Year Award, and she is a regular contributor to Long Island Business News. She is a sought-after commentator on news media and social media issues, and is a contributor to the book Everything You Always Wanted to Know About Social Media.

Jaci's professional affiliations have included membership in the Association of Women in Communication and International Radio and Television Society Foundation Inc. She is a member of the University of Illinois at Urbana-Champaign’s Media Ethics magazine advisory board and is an honorary member of the League of Women Voters of the City of New York's Annual Luncheon. She was a regular guest on PBS affiliate WLIW's 21 Forum and an adjunct professor of journalism at Hofstra University. She was a director of Bethpage Federal Credit Union, a Long Island-based financial institution with more than $3 billion in assets, and is currently a member of the board of directors of The Early Years Institute.