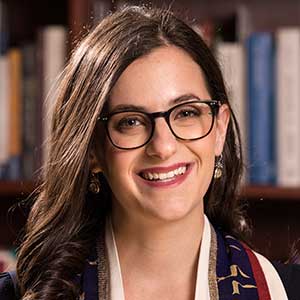 Cantor Alexandra Fox believes in the power of music to foster a community that inspires, comforts, uplifts, and heals.

On July 1st, 2021 Alexandra will become the inaugural cantor of Har Sinai – Oheb Shalom Congregation in Baltimore, MD. Prior to this position, she was the cantor at Peninsula Temple Sholom (PTS) in Burlingame, California, where she proudly served as the first ordained cantor in the temple's history. She received her cantorial ordination from the Debbie Friedman School of Sacred Music at Hebrew Union College-Jewish Institute of Religion (HUC-JIR) in May 2018 and holds a Bachelor of Science in Music from Hofstra University and a Master of Sacred Music from HUC-JIR.

Alexandra wanted to be a cantor since she was 8 years old, having been inspired by Cantor Stephen Dubov z"l. She sang in her temple’s youth choir and spent her teenage years singing on the bimah with Cantor Dubov, dreaming of the day when she would become a cantor herself.

During her tenure at PTS, Alexandra revitalized the musical life of the synagogue. For the High Holy Days of 5780, she hired and incorporated a worship band of professional instrumentalists and successfully moved all musical forces from the choir loft to the bimah for the first time in the synagogue's 65-year history. Among her greatest joys from her time at PTS is the creation of the youth choir, Kehillah Singers.

During her cantorial studies, Alexandra served as student cantor at Am Shalom in Glencoe, IL; KAM Isaiah Israel in Chicago, IL; and Temple Emanuel in Roanoke, VA. She discovered her deep love for camping infused with Jewish culture and values during the two summers she spent at URJ Goldman Union Camp Institute in Indianapolis. Additionally, she served as the Student Liaison for the American Conference of Cantors Executive Board.

One of the highlights of her career thus far is her time serving as a chaplain intern at Northwestern Memorial Hospital in Chicago. Her experiences there led her to write her master’s thesis and perform her senior cantorial recital, titled Ahavah Nitzchit – Love Doesn’t Die, on how Jewish music can help a family through the death of a loved one. Alexandra’s cantorate, through both her life experiences and her research, has come to be inspired by helping people find meaning during the most fragile moments of life.