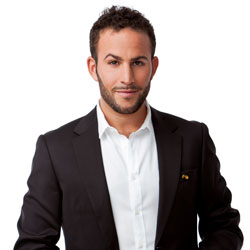 Micah Jesse Koffler (B.A. ’09) grew up fascinated by the fabulous lives of the rich and the famous, and at an early age found himself glued to the television mimicking the likes of Regis Philbin and Ed McMahon. When Micah moved to New York to attend college, he carried that passion with him, and began writing about his celebrity encounters. Within a year's time, his eponymous blog, MicahJesse.com, was born.

Micah Jesse enrolled at Hofstra University in 2005, and quickly became a recognizable face among the student body. Pulse, the campus magazine, wrote a full-page feature article about Micah titled, “True Life: I’m A Hofstar. A Glimpse Into The Life Of Hofstra’s Own Celebrity Student,” chronicling Micah’s superior grades and internship with music mogul Tommy Mottola.

He landed his first regular television gig in 2010 as a co-host on Music Choice Network's on-demand show Certified. The following year, he hosted his very own entertainment segment, Plus 1, revitalizing the network's presence on the red carpet with his vivacious celebrity interviews. He has appeared on LIVE! With Regis and Kelly, VH1's Big Morning Buzz LIVE!, Associated Press TV, Fox News, and the CNN Headline News program Issues with Jane Velez-Mitchell and has been featured in editorial spreads in YRB Magazine, Blackbook, and 944 as an emerging face in nightlife and entertainment.

In addition to his blogging and television appearances, Micah is a spokesperson and host for companies including Pepsi Co., General Motors, Unilever, and Johnson & Johnson. Micah's ability to seamlessly and organically deliver key messaging for these brands, while interacting with celebrities on camera, have made him the go-to on air personality in the ever-evolving field of branded digital content.

Micah has immersed himself in a number of philanthropic endeavors over the years, lending his name and time for causes close to his heart, including anti-bullying and LGBT rights. After posting an It Gets Better video on YouTube, Micah was asked to appear as a spokesperson for the organization. He has promoted the NOH8 Campaign, The Bully Project, Live Out Loud and, most recently, he became the entertainment correspondent for the WWE and Creative Coalition's Be a STAR Alliance, which promotes anti-bullying initiatives.

MicahJesse.com and Micah's corresponding social media channels are destinations for his ever-growing audience to read positive and refreshing celebrity news, interviews and event coverage. Readers can tag along with Micah as he navigates the entertainment industry, staying true to his roots and, most important, always remaining positive!