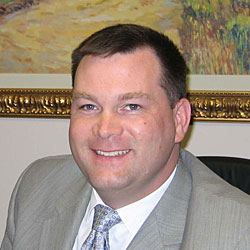 Matthew Tully (B.A.,’95) has spent his adult life crafting goals he thought were too big to attain and then achieving them systematically through grit and determination. Long before he became a worldwide face for military and federal employment law, Mr. Tully was a working-class kid with big dreams and desire to match.

On Sept. 11, 2001, while employed in the legal department of Morgan Stanley, Mr. Tully escaped from his office in the World Trade Center and shortly thereafter relocated with his family to upstate New York. There he started a law practice out of his house. He began providing legal services to friends and former colleagues, but the firm quickly outgrew his home, and, with fellow Hofstra graduate Greg Rinckey (’95) as managing partner, Tully Rinckey PLLC opened an office in Albany, N.Y. in 2004. The firm’s success in federal employment and military law resulted in the opening of additional offices in Washington, D.C., Arlington, Va. and New York City.

Mr. Tully concentrates his practice on the representation of military personnel and federal sector employees. He has represented federal employees before numerous federal agencies and has appeared in court before the U.S. Federal Circuit Court of Appeals and the U.S. Supreme Court. Mr. Tully has become a pioneer in the field of Uniformed Services Employment and Reemployment Rights Act (USERRA) litigation, winning several landmark cases that have greatly influenced the laws protecting U.S. veterans.

His leadership in military law is reflected in his role as a nationally syndicated columnist for the Army Times Publishing Company, where his “Ask the Lawyer” column is featured biweekly in Army Times, Air Force Times, Navy Times and Marine Corps Times.

A lieutenant colonel in the New York Army National Guard, Mr. Tully was admitted as a solicitor to the Supreme Court of England and Wales, becoming one of the few American attorneys licensed in a foreign country.