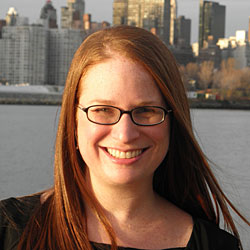 Stacy Friedman (B.A. ’99) combines an array of television production experience with the efforts of an avid AIDS activist. After graduating from Hofstra with a bachelor’s degree in television and film production, she began her career in the Saturday Night Live film unit as the assistant to the producer/director. She quickly moved up to become the post-production coordinator, supervising all aspects of SNL film production from the set to the air. Her team won a Primetime Emmy Award for their work on the Saturday Night Live 25th Anniversary Special.

In March 2001, Stacy moved to Isis Post in New York as an assistant producer working to acquire new clients, while managing many of the day-to-day activities such as handling the needs of the editors, coordinating scheduling, and budgeting.

After her time at Isis Post, she returned to her love of production, freelancing as a script supervisor, production coordinator, and casting assistant on projects that included America’s Got Talent, American Inventor, American Idol, American Juniors, Making the Band 2, and music videos.

In February 2003, she joined the Oxygen Network’s On-Air Promotions team as a production assistant. In 2005, she was promoted to production coordinator, and then moved up to her current position as production manager in 2007. Today, Stacy manages and produces all promo and print shoots in New York City, Los Angeles, Mexico, and across the United States. She hires crews, manages talent, books equipment and locations, and is responsible for keeping all shoots on budget. She also supports producers on all aspects of pre- and post-production, including scheduling, contracts, vendor relationships, feedback and approvals, and deliverables.

While maintaining her position in the television industry, Stacy has served for the past nine years as team leader for a volunteer project at Terence Cardinal Cooke Health Care Center, an HIV/AIDS care center in Harlem. She has actively volunteered for a variety of AIDS-related projects since the early ’90s. In 2005, she and 15 others took a trip to Vietnam to participate in an event called TrekAsia, an adventure challenge that raised funds for AIDS research. Stacy and a friend raised almost $20,000 to participate in the event, which had them kayaking in Halong Bay, trekking through the Mai Chau Valley and staying in local tribal villages. She is currently working on a documentary about the AIDS epidemic in Vietnam, spurred by her experiences in TrekAsia and a subsequent trip to Vietnam.