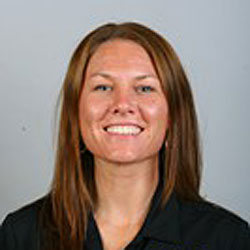 Lauren Hall-Gregory (B.A. '03) recently completed her first season as head coach of the New York University women's basketball team. She had three players achieve All Conference Honors (one is the first NYU freshman to win the Rookie of the Year award in the UAA Conference), and the team had a combined  3.3 GPA for the fall semester. Lauren also launched an alumni mentorship program that partners current NYU players with graduates.

Lauren went to NYU after spending the last four seasons as the recruiting coordinator and first assistant coach at Division I Sacred Heart University in Fairfield, CT. In her four years at Sacred Heart, the Pioneers went 87-40 (.685) overall, 57-9 (.864) in the Northeast Conference (NEC), and made two trips to the NCAA Division I Championship. Those NCAA berths came in 2008-09 and 2011-12, with Sacred Heart capturing the second and third NEC titles in program history in those years. After going 25-8 overall and 15-3 in the NEC this past season, the Pioneers ended the year ranked 17th in the CollegeInsider.com Mid-Major Top 25 Poll.

Prior to her time in Fairfield, Lauren spent two seasons as a graduate assistant coach at Lehigh University in Bethlehem, PA. The Mountain Hawks reached the semifinals of the Patriot League Tournament both years and posted an 18-13 overall record in 2007-08.

Lauren began her coaching career as an assistant at the College of St. Mary's in Omaha, NE, in 2005-06. That year, the Flames advanced to the Sweet 16 of the NAIA Division II Tournament.

A 2003 graduate of Hofstra University with a Bachelor of Arts in interdisciplinary studies with a human development focus, Lauren was a three-year starter and three-year captain for the Pride as point guard. She led the America East Conference in assists as a sophomore and was first in the Colonial Athletic Association in assists as a junior. The Pride's MVP her sophomore year, Lauren ended her career fourth in school history in assists (454).

Lauren, who earned a Master of Education in secondary education with a concentration in social studies from Lehigh in 2008, is a native of Vienna, VA, and resides in Ossining, NY.